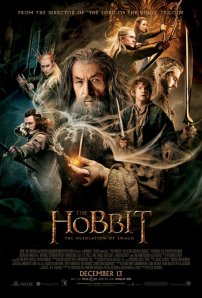 From the novel by J.R.R. Tolkien

Bilbo Baggins and the company of dwarves led by Thorin Oakenshield must continue on their quest towards Erebor, the mountain home of Smaug. Their mission is to retake the Kingdom Under the Mountain, the true home of the dwarves, from Smaug. This terrifying dragon has made the mountain his home since he defeated the dwarves many years before. Along the way they are forced to contend with a band of elves unwilling to aid them. Bilbo is able to prove his worth as they continue towards the mountain and their goal.

The continuation of the story started with The Hobbit: An Unexpected Journey is an enjoyable film. Once again director Peter Jackson (The Lovely Bones) proves his ability to stay true to the subject material. Jackson wrote the wonderful screenplay for this movie alongside Fran Walsh (King Kong), Philippa Boyens (The Lord of the Rings: Return of the King), and Guillermo del Toro (Cronos). The cast is also great, bringing back all of the familiar faces from the first film in the trilogy. This includes Ian McKellan (Gods and Monsters), Martin Freeman (The World’s End), Richard Armitage (Captain America: The First Avenger), Orlando Bloom (Black Hawk Down), Evangeline Lilly (The Hurt Locker), Cate Blanchett (Babel), and Benedict Cumberbatch (War Horse).

This is a visual splendor, much like the first film. The movie does a wonderful job of remaining true to the vision of Middle Earth created in the Lord of the Rings trilogy. The visuals are impressive, not only from the landscapes and settings, but also the characters created for the film. Smaug is perhaps the most impressive dragon I’ve ever seen in a film. The many creatures and other characters also created are wonderful as well. Adding in great set designs and camera work, this is an awesome technical display. Overall, this will not disappoint anyone hoping for an impressive beautiful movie.

The acting in this film is equally impressive. Taking into account the difficulties involved with the green screens and all of the other technical challenges, the actors did an awesome job. Ian McKellan is as wonderful as always, making Gandalf a complicated and compassionate person. Martin Freeman is equally impressive in a role that is required to evolve throughout the story. The rest of the cast does an impressive job in their roles, bring together a myriad of characters that bring Middle Earth to life.

The story for this part of the series must have been incredibly challenging. How do you decide where to end a film when you have another movie in the works to complete the story. I’m glad that it wasn’t a decision I was forced to make. Thankfully, Jackson and the team of writers made an excellent choice on how to script this one. Unlike the second Pirates of the Caribbean film, this is not just a placeholder in need of an end. Unfortunately there are a number of loose ends throughout the movie. This was bound to happen due to the multiple story lines and the number of new characters introduced at this point in the film. This doesn’t make the movie any less enjoyable, but it will leave you wanting a little more.

This is a wonderful movie that takes The Hobbit and brings it to life much like I imagined it as a kid. If you’re a fan of the books of Tolkien, or The Lord of the Rings trilogy, this is one for you. I would definitely suggest seeing the first film before diving into this one. I would also recommend this for fans of action-adventure films. I give this one 4.7 out of 5 stars.