Howard Langston is good to his customers, perhaps too good to them. While he’s excelled at work, his wife (Wilson) and son (Lloyd) have gotten accustomed to his constant absences. When he’s forced to face his failures as a family man, Howard heads out seeking the perfect gift for his son. Unfortunately, his son is hoping for a Turbo Man action figure, the season’s hottest toy. With fierce competition from another last-minute father (Sinbad), Howard is going to do whatever it takes to win back the love of his family. In the end it might take more than the perfect gift to do the job.

Brian Levant (The Flintstones) was one of the kings of family films in the mid to late nineties. This film was written by Randy Kornfield (Eight Legged Freaks) and features some of the big names from the nineties. This includes Arnold Schwarzenegger (Total Recall), Sinbad (Houseguest), Phil Hartman (Coneheads), and Rita Wilson (Sleepless in Seattle). Playing in only his second film was the future Anakin Skywalker, Jake Lloyd (Star Wars: Episode 1 – The Phantom Menace). 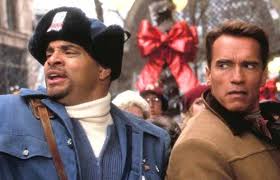 This is a fun film, albeit very cheesy. It’s the kind of movie that’s perfect for a family trying to find something to enjoy together during the holiday season. Schwarzenegger seemed to find himself in all kinds of movies at the height of his popularity. Thankfully he’s not the one expected to bring the comedy. That was left to Sinbad and Phil Hartman. Each of them does a good job bringing the laughs throughout. Wilson and Lloyd also do a nice job in their roles.

This is just a fun movie. If you’re a fan of Christmas movies, this is worth checking out. It’s not an award-winner, but it’s good clean fun for the family. I would suggest this one to fans of the actors also. I give this one 2.5 out of 5 stars.