Con-artists Irving Rosenfeld (Bale) and Sydney Prosser (Adams) had a nice business going before they were caught by the feds. Now Irving and Sydney are working for the F.B.I. and agent Richie DiMaso (Cooper). Together they soon find themselves in the world of back room dealings with the mob and crooked politicians.

Director David O. Russell (The Fighter) and Eric Singer (The International) got together and wrote the screenplay for this unique film. Russell made this film with a very talented cast that includes a number of actors from his previous films. This includes Silver Linings Playbook stars Jennifer Lawrence and Bradley Cooper. Christian Bale and Amy Adams are also familiar with Russell from their work together on The Fighter. The cast also features Jeremy Renner.

The acting in this film is wonderful. Christian Bale (The Dark Knight Rises) and Bradley Cooper (Limitless) really lead this incredible cast with powerful performances. Bale is at the top of his game with a role that required a physical transformation and a performance to go along with it. Bradley Cooper is equally impressive in a role that ranged from comical to dramatic. Amy Adams (Man of Steel) and Jennifer Lawrence (The Hunger Games) also pull off their roles wonderfully. Adams is especially good with a role that seems to step outside of the films she’s normally in. Jeremy Renner (The Bourne Legacy) also does an awesome job in a role that is unlike anything he’s done previously. When the award season kicks into full gear I expect to see a lot of recognition go to the actors in this movie. 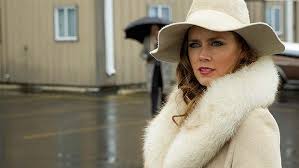 Visually, this is a really nicely made movie. The set design creates a unique version of the world as we knew it in the late seventies. The vehicles and sets seem to be perfectly chosen. The costumes are even better in this one. I love the clothing since it’s more of a caricature of the period than reality. Adding to the images is a great score by Danny Elfman.

The story for this film is a bit more complicated than I expected it to be. I really enjoyed it, but this movie requires a lot of attention from viewers since it runs over two hours and features a number of subtle details that are important to the story. I think this might be a bit of an issue for some viewers since there are so many twists and turns. This didn’t hurt the film for me since the story pays off nicely.

This is a good movie for fans of dark comedies or crime films. I would also recommend this to any fans of the stars of the film. For each of them, this movie has provided a unique performance in a transforming role. As of this review, the film and the actors in it have received two Screen Actors Guild Award nominations and seven Golden Globe nominations. This is a great movie, but make sure you are ready to follow an intricate story. I give this one 4.7 out of 5 stars.