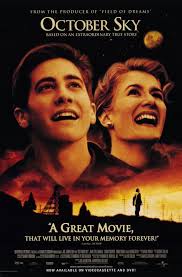 Based on the novel by Homer H. Hickam Jr.

Homer Hickam (Gyllenhaal) comes from Coalwood, a small coal-mining town in West Virginia. The chances to get out of the town are very slim for most of the young men. Most are destined for a career in the mines. Homer finds an opportunity for more than mining when he witnesses the orbit of Sputnik and begins to study rocketry. Despite the objections of his father (Cooper), Homer wills himself forward with the aid of a supportive and devoted teacher (Dern). Now Homer and his friends seek to understand the science behind their passion and obtain a way out of Coalwood.

Every so often an inspirational film is made that doesn’t feel the need to put a bow on every aspect of the story. This willingness to live with an imperfect truth is part of what makes this movie so good. Joe Johnston (Captain America: The First Avenger) directed this film using the screenplay by Lewis Colick (Ladder 49). The story came from the novel by Homer Hickam. The film features a small and talented cast of recognized actors including Jake Gyllenhaal (Source Code), Chris Cooper (The Town), and Laura Dern (The Master).

Creating Coalwood, West Virginia was essential to the authenticity of the film. The production team did a wonderful job recreating the mining town era of the late fifties. From the cars, to the costumes, no details seemed to be missed. Along with great camera work and the other technical aspects this movie was nicely done.

The acting in this film is great. The young Jake Gyllenhaal does an awesome job playing the determined and often conflicted Homer. Chris Cooper is equally good as the well-meaning but stubborn father. The two have some incredible scenes together that bring out the age-old conflict between fathers and sons with great success. Laura Dern is also great in this one. Thankfully, the screenplay wasn’t written to turn her into something more than a supportive teacher.

The story features a good amount of reality mixed in with the Hollywood touch. The screenplay was nicely written, and the end result is an inspiring and entertaining film. There are moments of comedy, drama, and pain that weave together to help make this movie a success. If there is any weakness in the film, it’s the outer conflicts that sneak into the story. Some of this conflict doesn’t drive the story, but distracts from it. This isn’t terrible, but something noticeable as the film moves towards the conclusion.

I would recommend this to anyone who likes inspirational films. This is a great family film that everyone should see. I would also suggest this to fans of the actors in the film. I give this one 4.5 out of 5 stars.