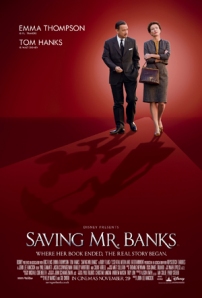 P.L. Travers (Thompson) and Walt Disney (Hanks) have been in an odd back and forth for almost twenty years. Now after two decades Walt has succeeded in bringing Travers and Mary Poppins to the Disney Studios. Travers own love of her stories is tied to her childhood, and letting go of control won’t come easily to the stubborn author. Walt is hoping to prove to her that he can give her work the honor and respect that it deserves.

Thanks to cooperation from the Disney Studios and the Disney family, this film was able to make it from idea to production. This included access to the Disney archives and the material used in the production of Mary Poppins. Writers Kelly Marcel (Fifty Shades of Gray) and Sue Smith (Peaches) took advantage of the opportunity and wrote a great screenplay. Director John Lee Hancock (The Blind Side) was able to turn that screenplay into a wonderful film.

The film has an incredible cast that is led by Emma Thompson (Sense and Sensibility) and Tom Hanks (Saving Private Ryan). Thompson took on the role of Travers, bringing her to life with a loveable eccentricity. Tom Hanks became the first actor to portray Walt Disney in a major film, and he did a wonderful job. The cast also includes Colin Ferrell (Horrible Bosses), Paul Giamatti (12 Years a Slave), B.J. Novak (Inglourious Basterds), Jason Schwartzman (Rushmore), and Bradley Whitford (The Cabin in the Woods). This cast does an incredible job, making every scene count. 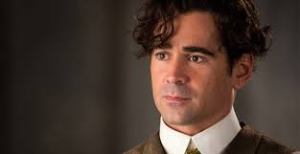 This movie was a wonderful look at the inner-workings of the Disney Company under Walt Disney. Mary Poppins is one of the classic Disney movies, and this new film sheds light on the challenges encountered in making this film. The filmmakers did a great job recreating the era and bringing life to the people involved. The sets, the costumes, and all of the other visual aspects of the film were done perfectly. The score is also great, taking advantage of some of the music that made Mary Poppins memorable. 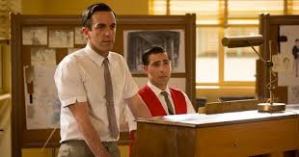 This was not a movie made to glorify Walt Disney or P.L. Travers. The film is an honest look at two people with their own unique flaws. I think this movie will appeal to Disney fans the most. The film opens up the archives of Disney to share some special insights. I would also recommend this one to fans of Hanks and Thompson. The two actors are incredible in this one. This is a wonderful family film, filled with drama and lighter moments. I give this one 5 out of 5 stars.