Oliver Barrett IV (O’Neal) is a Harvard law student from the privileged segment of society. With his family legacy to consider, Oliver is under pressure to refine every part of his life. When he meets Jennifer (MacGraw), a young music student from Radcliffe, she doesn’t quite fit into the plan. Now Oliver has to choose between his family’s approval and the girl he loves. When Jennifer and Oliver are married the two begin to experience the challenges of building a life together, but these challenges are only a taste of what is to come. 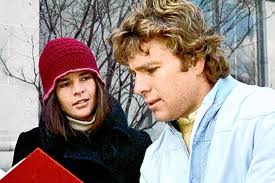 Every once in a while I prefer to watch a movie that found success in a generation I wasn’t around for. This is definitely one of those movies. The film was released in 1970 to immediate commercial success. Some critics consider this to be the birth of the “chick flick”. The story was written by Erich Segal (A Change of Seasons), and earned him an Oscar nomination for Best Original Screenplay. The film was directed by Arthur Hiller (Author! Author!), a multifaceted director of television and film. The cast includes a great mix of talent including Ali MacGraw (The Getaway), Ryan O’Neal (Barry Lyndon), John Marley (The Godfather), and Ray Milland (The Lost Weekend).

In the overly sentimental world of romance this film fits right in. The story is designed to pull at the heartstrings of the viewers, and does a decent job of it. Although this was a major success at the time of its release, this is a relatively weak story. The film feels predictable and over-dramatic from early on. Despite these flaws, there is something strangely interesting about the characters and this really helps.

The acting in this film has some great moments as well as some really sappy moments. The best acting in the film comes from John Marley whose portrayal of a working-class father is great. Ray Milland is also great to watch, although he doesn’t have a role that really takes advantage of his talent. MacGraw and O’Neal are a nice pair on the screen, despite the sappy dialogue between them that creeps into the film periodically. 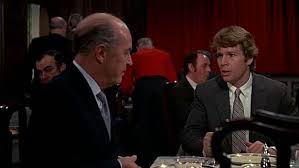 This film hasn’t aged very well when compared to some of the films of the early seventies. Despite this, the movie still holds some value as an example of early emotional romance on film. If you’re a fan of the stars in this one you might this one. I would also recommend this to fans of sappy romances. I give this one 2.8 out of 5 stars.