Based on “A Captain’s Duty: Somali Pirates, Navy SEALS, and Dangerous Days at Sea” by Richard Phillips and Stephan Talty

The American flagged Maersk Alabama is headed to Mumbasa from Oman when Captain Richard Phillips (Hanks) spots several boats approaching. The area section of the ocean they’re sailing has been a hotbed of pirate activity, and now it might be coming right to them. When the ship is boarded the men of the Maersk take action, leading the pirates (Abdi, Abdirahman, Ali, Ahmed) to abandon the ship. Unfortunately they’ve taken Captain Phillips with them, looking for a way to cash in. 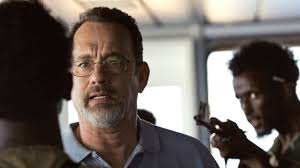 I have to come clean and admit that I wasn’t even a little interested in seeing this film when it was first announced. After a while the nominations started coming in and I decided it was time to check it out. This movie is based on real events surrounding the kidnapping and rescue of Captain Richard Phillips from Abduwali Muse and his crew of Somali pirates. In 2010 Phillips co-wrote a book about his experiences alongside Stephan Talty. Upon the publishing of the book, Sony Pictures quickly snapped up the film rights and Billy Ray (The Hunger Games) got to work on the screenplay. This screenplay quickly became a working project with Paul Greengrass (The Bourne Ultimatum) taking on the job of director.

The cast of this movie is an interesting collection of seasoned actors and new faces. Tom Hanks (Saving Mr. Banks) heads up the cast with an excellent performance. Some of the other familiar faces include Catherine Keener (The Soloist) and Michael Chernus (The Bourne Legacy). They both do great work with their parts in this movie. Some of the best acting, however, comes from the new faces in the world of film. Barkhad Abdi, Barkhad Abdirahman, Faysal Ahmed, and Mahat M. Ali all do an incredible job with very challenging roles in this one. None of them had acted prior to this film but it isn’t obvious. Their performances truly make this a great movie instead of a good movie.

The visuals in this one are really nicely done. I think that the creation of the confined spaces in the film really heightens the suspense throughout the bulk of the story. The camera work adds to the suspense with great shots that are pieced together with some wonderful editing. The effects and sets used all come together as well, creating the intense events with great skill. 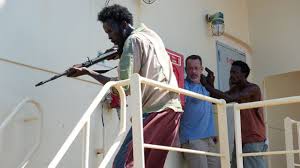 I did have one issue with this movie. The film opens up the world outside the ship, starting with the Phillips family home. This portion of the film led me to expect more interaction with that portion of the world. Unfortunately the movie seems to forget about that part of the world. I think it might have made more sense to leave it out altogether. This isn’t a major flaw, but one that distracts from the focus of the story.

It’s definitely worth noting that there isn’t much mystery to how the story ends. Somehow this doesn’t make the movie predictable. Oftentimes films like this become predictable and rely on minor characters or fictional events within the story to make things work. This movie stands on the major story with great success. The intensity of the story remains intact and delivers with a great ending.

This is a really good film. Fans of Hanks will eat up his excellent performance. The movie will also appeal to people who love true life stories. This is an action movie that is very intense from early in the film through the last moments. If you’re into the edge-of-your-seat kind of films, this is one for you. I give this one 4.6 out of 5 stars.