Grug (Cage) is a very cautious caveman, with a cave family he wants to protect. His family includes his mother-in-law (Leachman), wife (Keener), and three children. His eldest child is his rebellious teenaged daughter Eep (Stone). In addition to being a risk taker, Eep has recently become attached to a wandering man named Guy (Reynolds). When their cave is destroyed, Grug is forced to trust in Guy to help them find a safe new place to live. Through their journey, the group might also find a new way to live.

This animated comedy hit the big screen in 2013 and became an immediate hit. In addition to commercial success, this movie was good enough to earn an Oscar nomination for Best Animated Feature. The story came from the combined efforts of John Cleese (Monty Python and the Holy Grail), Kirk DeMicco (Racing Stripes), and Chris Sanders (How to Train Your Dragon). Sanders and DeMicco also co-directed the film. The cast features a wide range of talented actors who gave their voices to these unique characters. These voices include Nicolas Cage (Adaptation), Emma Stone (The Help), and Ryan Reynolds (Safe House). In addition, the cast features Cloris Leachman (High Anxiety), Catherine Keener (Capote), and Clark Duke (Kick-Ass).

This is a really fun story with a great take on the lives of cavemen. The characters are unique and wonderfully designed to fit into the fantastic world the artists have created. The story is fun, but it also carries a nice message that fits the setting. The dialogue is really nicely written also, making the movie fun and ensuring a lot of laughs. Like most successful animated features, this one seems to work on several levels, making sure that it works for audiences of all ages.

The voice work in this movie is wonderful. Every one of the actors brings a great style to their character. This is really great since each of the characters is so unique. The actors delivery of the dialogue is nicely done throughout the film also, keeping the comedic timing working nicely. The script was certainly written to work to their benefit, and it shows in the final product. 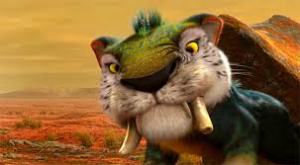 This movie is also a visual treat. The characters are all wonderfully designed. The many creatures and settings are equally beautiful. This combination of characters and settings comes together perfectly, adding to the world of the story with great success. The attention to detail shows throughout the movie. 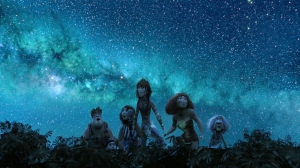 This is a great movie that is perfect for the whole family. If you’re a fan of films like How to Train Your Dragon, this one should be perfect for you. I would also recommend this to fans of animation in general. I give this one 4.4 out of 5 stars.