Steve Jobs (Kutcher) has dropped out of college. It’s 1974 and he’s unsure of what to do with his life. After some time overseas with his friend Daniel Kottke (Haas), Jobs returns home. When he discovers that Steve Wozniak (Gad), an old friend, building a prototype personal computer, Jobs sees an opportunity to do something big. With this new computer, Jobs and Wozniak establish Apple Computers. Despite his rising commercial success, Jobs is also plagued by personal failings which threaten everything he is trying to achieve. Over the course of the next four decades Job transitions from genius, to outcast, to a technological icon. 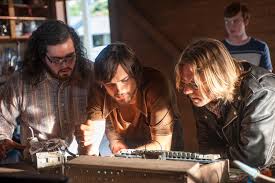 Like The Social Network, this film is an attempt to understand one of the people who have shaped the world as we know it through innovation. Director Joshua Michael Stern (Swing Vote) and written by Matt Whiteley, the film attempts to dig into the mind of Steve Jobs. Their casting choices are an interesting mix of varying levels of talent. This includes Ashton Kutcher (Valentine’s Day), Josh Gad (Frozen), Dermot Mulroney (J. Edgar), Luke Haas (Inception), J.K. Simmons (Juno), and Matthew Modine (The Dark Knight Rises). 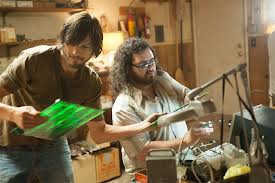 This movie is a great example of filmmakers being overly confident in the material. In their effort to humanize Jobs, Whiteley created a screenplay that seems to serve two extremes. This gives you a portrait of Jobs that serves to make him both the hero and the villain, but without anything to bridge the gap or really humanize the man. In contrast to my observations, the critics disliked this one for other reasons. E! Online stated that the movie “falls far short of its ambition, marred by its superficial and unsatisfying portrait of an icon who deserved better.” I think that the opposite is true. Unlike The Social Network, this movie seems to gloss over many of the personal failings of Jobs.

This film is nicely summed up by Roger Ebert.com writer, Susan Wloszczyna. “Rather than attempting a deeper plunge behind the whys and wherefores of the elite business-model gospel according to Apple Inc. guru Steve Jobs and – more importantly – what it says about our culture, the filmmakers follow the easy rise-fall-rise-again blueprint familiar to anyone who has seen an episode of VH1’s Behind the Music.”

The acting in this film is good, but falls way short of being memorable. Kutcher just isn’t convincing enough in the role, failing to bring out the depth of Steve Jobs personality. For most of the cast, the writing also seems to fail them in their efforts. The dialogue is predictable and sometimes borders on trite. Perhaps the shining moments of the film comes from one of the surprisingly good performers. Josh Gad seems to embody his role more accurately than the rest of the cast. The writing also allowed Gad to bring some of the better moments of the movie to life.

Overall, this is a weak attempt to understand and communicate the intricate nature of the man behind the myth. Steve Jobs has been idolized by many, but this film does not do justice to his cultural or technological contributions. If you’re a fan of biographical films, or of the actors, you might enjoy this one. Otherwise, this movie seems to come out a bit flat. I give this one 2 out of 5 stars.