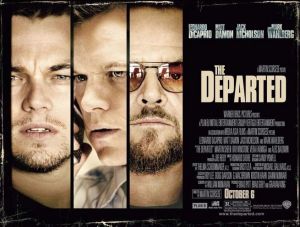 An undercover state cop who has infiltrated an Irish gang and a mole in the police force working for the same mob race to track down and identify each other before being exposed to the enemy. This hunt intensifies after both sides realize their outfit has a rat. No one is safe as the casualties of this search begin to pile up.

If you read my reviews, you know that I normally identify characters by name, and also by the actor playing them. This time around it’s impossible to do so without spoiling parts of this intricate plot. This film is actually a remake of Mou gaan dou, a Hong Kong thriller. The rights to the story were obtained by producer Brad Grey (City by the Sea) and actor Brad Pitt (12 Years a Slave). The two of them later secured Martin Scorsese (The Wolf of Wall Street) to direct the film, and got William Monahan (Edge of Darkness) to adapt the screenplay. The hard work paid off, earning Academy Awards for Best Picture, Best Director, Best Screenplay, and Best Editing.

Like many of the films Scorsese directs, this one has no shortage of big names. The film stars Leonardo DiCaprio (Django Unchained), Matt Damon (True Grit), Jack Nicholson (Terms of Endearment), and Mark Wahlberg (Lone Survivor). The film also stars Martin Sheen (The Double), Ray Winstone (Hugo), Vera Farmiga (Source Code), Alec Baldwin (Glengarry Glen Ross), and Anthony Anderson (Hustle & Flow). This long list doesn’t even cover all of the recognizable faces in the movie. These actors all brought out their best for this intense and dramatic thriller. Mark Wahlberg was also nominated for an Oscar for Best Supporting Actor for his part in this movie.

The camera work and visual aspects of this film are incredible. Thanks to the unique styling of Scorsese’s work, the film seems to tap into a dark underworld that most people have never truly experienced. The imagery is intense and often shocking, really lending itself to the themes of the film and the story itself. This is a film that doesn’t look away when the intensity ramps up, instead the camera work seems to approach the violence head-on. The Oscar-winning editing is definitely a major factor in the success of this movie.

The acting and visuals can be credited for a great deal of this film’s success. Perhaps the largest factor is the incredible story. This adapted screenplay was turned into something intense and exciting by William Monahan. The story seems to allow the viewer insight into the many different character’s activities, but somehow keeps the mystery alive. The twists and turns seem to come out of nowhere, leaving you with the sense that no one is safe. This sort of intensity drives the film from beginning to end, making this movie a wild ride.

This is an incredible movie. If you’ve missed this one, take the time to check it out. It is intense, so people who don’t care for violence in movies might not enjoy it. I would recommend this to fans of any of the actors named above. The acting is great throughout the film. I would also recommend this to fans of crime films, dramas, and thrillers. This is a wonderful movie that was absolutely deserving of the Oscar for Best Picture. I give this one 5 out of 5 stars.