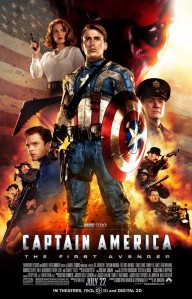 It’s the height of World War II when a special Nazi force captures a mysterious object known as the Tesseract. This force is led by Johann Schmidt (Weaving), a violent and intelligent scientist looking to turn the Tesseract into a powerful weapon. Meanwhile, Steve Rodgers (Evans) is trying to join the military. His small stature and laundry list of ailments have kept him out so far. All of this changes when he’s enlisted for a secret government experiment by Dr. Abraham Erskine (Tucci). This experiment transforms Rodgers into a larger stronger soldier, with abilities unlike anyone has seen. Now he’s going to have to use this change to help the Allies win the war. He won’t just be fighting soldiers, but also Johann Schmidt and the creature he has become.

This movie is based on the classic comic book series, Captain America. The character was the creation of Joe Simon and Jack Kirby. For Jack Kirby this is just one of many classic characters he helped to establish. He also worked on Iron Man and X-Men. As with other comic book heroes, Captain America was adapted for film. The screenplay was written by Christopher Markus and Stephen McFeely who also worked together on Thor: The Dark World. This movie was directed by Joe Johnston (October Sky), who has done a wide variety of nice work over a long career.

This is a nice addition to the Marvel-inspired series of films currently being produced. The story is simple, but does a good job introducing Captain America. The movie is a bit routine at times, but overall maintains a certain quality that makes it enjoyable. I do think that the story takes too much time to focus on some less needed details early in the film. This slows the pace a bit, and makes this a bit long for a film of this kind.

The acting in this one is pretty good. Chris Evans (Scott Pilgrim vs. the World) does a good job maintaining the nature of his character throughout the story. Even as he becomes Captain America, it was important for Evans to keep Steve Rodgers personality intact. I also enjoyed the performances of Tommy Lee Jones (Lincoln), Stanley Tucci (The Devil Wears Prada), and Hayley Atwell (The Pillars of the Earth). In addition to their nice performances, Hugo Weaving (The Hobbit: An Unexpected Journey) does an excellent job playing the villain, Johann Schmidt / Red Skull. These actors and the rest of the cast do a great job bringing the Marvel world of Captain America to life.

This movie is great from a visual standpoint. Having seen it in 3D and 2D, I will advise you to save your money and see it in 2D since the 3D effects didn’t add anything to the movie. That said, the visual effects in this movie are great, especially Chris Evans’ transformation. I also enjoyed the work done to create Weaving’s character, Red Skull. The action sequences were nicely done, and kept the second half of the film exciting.

This is a good movie, but falls a bit short for me. Mainly it’s the pace of the film, which seems to slow down far too much to focus on some lesser needed details. I would still suggest this one to anyone who likes the Marvel films, or comic book movies in general. I would also suggest this one to fans of any of the stars. I give this one 4.3 out of 5 stars.