Based on the book by Daniel Coyles

Conor O’Neill (Reeves) is running out of options. After a series of bad bets, this gambler is in debt to the wrong people, and looking for a way to make some money. When he comes to a friend looking for a loan, the friend offers him a job coaching a youth baseball team. No Conor has to convince the kids, their parents, and their teacher (Lane) that he’s up for the job. As he begins to win over the team, he starts to separate himself from the mistakes of his past.

This film was loosely based on the true story told in the book Hardball: A Season in the Projects by Daniel Coyles. The screenplay was developed by John Gatins (Need for Speed), and the film was directed by Brian Robbins (Varsity Blues). The cast of the movie includes Keanu Reeves (The Matrix), Diane Lane (Hollywoodland), and John Hawkes (Winter’s Bone). In addition, the film features D.B. Sweeney (Eight Men Out), Michael B. Jordan (That Awkward Moment), and a number of other recognizable faces.

The story for this one might have worked better as a novel. The adjustment to film left this feeling predictable, lacking anything compelling that would’ve created surprise. The dialogue is also a bit rough, bordering on stereotypical when it comes to the young black characters in the film. The movie also leaves gaping holes in the story that needed explanation or at least closure to work out. Despite the flaws there is something to be said for the overall message of the film. Overall, this one missed the mark in terms of the writing. 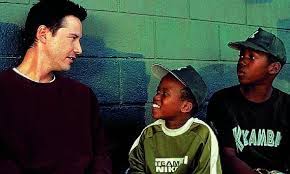 The acting in this one is a little rough as well. Keanu Reeves does a decent job, but fails to really capture the essence of his character. Diane Lane suffers from a similar lack of connection, which is also apparent in the interaction between herself and Reeves. Their relationship in the film seems to be improbable and lacking any real depth, going from one end of the scale to the other with little motivation. The rest of the cast does a good job, but the material wasn’t really built for anyone to find much success. While there are heartwarming moments, there are too few of them.

Unfortunately, this movie did not play well with the fans or the critics. For baseball fans, this movie is worth watching. Like many similar movies it works on themes of redemption and rising above challenges. These themes do make this a bit formulaic, but it’s still got some nice moments. The score is decent throughout, but the soundtrack really dates this movie. I would only suggest this to fans of the actors or diehard baseball movie fans. I give this one 2.5 out of 5 stars.