#6 of the Top Ten Baseball Movies 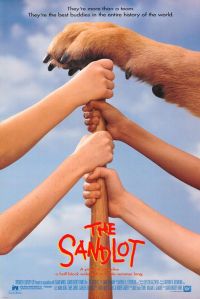 Scotty Smalls (Guiry) wants to fit in. Living in a new town, he’s found few connections with the other kids in the neighborhood. All of that changes when he’s befriended by Benny, a talented baseball player from the local sandlot. Soon Scotty finds himself experiencing the youthful adventures he and his friends cook up. This includes their biggest adventure, as the boys take on the enemy of all lost baseball, the dog they call The Beast.

The story behind The Sandlot came from Robert Gunter (The Sandlot 2) and David M. Evans (First Kid). Evans also directed the movie which initially met only moderate levels of success. As time has passed, this has become an oft-quoted and cult classic film. The movie stars a memorable cast of young actors like Tom Guiry (Black Hawk Down), Mike Vitar (D2: The Mighty Ducks), Patrick Renna (Son in Law), and Chauncey Leopardi (Safe). In addition, the movie features James Earl Jones (Field of Dreams), Denis Leary (Monument Ave.), and Karen Allen (Raiders of the Lost Ark).

The real success of this story comes from its ability to capture the essence of youthful exuberance. The story is part reality and part youthful folk tale. In the end the writing really captured the characters and what was important to them. This meant living with the overly sentimental moments of the movie that still seem to work. This is also due to dialogue that feels genuine and honest throughout the movie. The end result of the writing is a memorable experience that has left people saying “You’re killing me Smalls” for years.

The acting in this one is fun from the very beginning. The casting brought together a group of unique young men who each put their own spin on their characters. The range of personalities really allows this group of boys to come together nicely, creating a believable friendship. Like many movies about childhood, the adult roles are also done well, but are designed to accent the adventures of the kids. Overall, it was done right with the acting in this one.

This is the kind of movie I’ve never gotten tired of. The comedy is great and the lines are memorable. In the end it’s the kind of movie people saw as kids, and now show their own children. If you’re a baseball fan this has a lot to offer, especially for anyone who played when they were young. This is also a nice family comedy that brings out just enough fantasy to make the story timeless. This one lives off of cheesy goodness but it’s unapologetic and it works. I give this one 4.8 out of 5 stars.