#9 of the Top Ten Baseball Movies

Morris Buttermaker (Matthau) is a has-been minor league baseball player who’s been down on his luck. Now he’s earning money coach a bunch of misfits on a little league team. This ragtag bunch of kids lacks talent, motivation, and even an understanding of the rules of the game. As Buttermaker pushes them to be better he brings his own brand of ridicule and wisdom to the table. As the season goes on, Buttermaker and the players set their sights on the Yankees and their hyper-competitive coach, Roy Turner (Morrow).

This is an irreverent baseball classic that pays tributes to the misfits of the game. Bill Lancaster (The Thing) wrote the screenplay for this movie, and Michael Ritchie (Fletch) directed it. The stars of the movie include Walter Matthau (The Odd Couple), Vic Morrow (The Glass House), Tatum O’Neal (Paper Moon), and Jackie Earle Haley (Little Children). The film also features a number of talented kids who make up the roster of the Bears. Upon its release in 1976, this movie became a surprise hit, earning positive recognition from critics and fans alike. Eventually, The Bad News Bears inspired two sequels as well as a television show and a 2005 remake starring Billy Bob Thornton.

The story for this one was written by Bill Lancaster, the son of the talented Burt Lancaster. The dialogue throughout the movie is harsh and surprisingly strong for the cast of kids. From profanity to racism, the film pushes the boundaries of how baseball movies have been made. The success of the story actually comes due to the obvious use of this language to promote the comedic moments of the film. In addition the movie is a clear statement about the hyper-competitive culture within American youth sports.

The acting in this one is good, but it was never intended to be great. The story is a satire and works mainly off of the comic talent of Walter Matthau. In contrast to Matthau, Vic Morrow does a nice job bringing out the angry competitive nature of his character. The young Tatum O’Neal is a perfect addition to the film, adding the emotional content to the story without being sappy. Finally, Jackie Earle Haley is perfect for the role of Kelly, the angry and often rebellious young talent. These four are just a handful of the people who came together to make this a memorable movie and a classic for baseball fans. 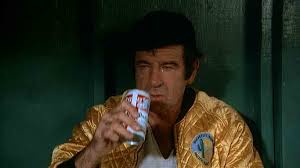 This is a great movie that I’ve continued to enjoy over the years. The references might have aged, but the comedy is still just as good. This isn’t a movie for the kids, mainly due to the strong language. Still, if you’re a baseball fan this is one you might enjoy. I would recommend this to fans of Matthau since his performance is great. I would also suggest this one to anyone who likes satirical comedy. I give this one 3.8 out of 5 stars.