#7 of the Top Ten Baseball Movies 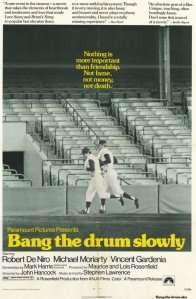 Based on the novel by Mark Harris

Henry Wiggen (Moriarty) is a successful pitcher for the New York Mammoths. Despite his success, he’s found a deep friendship with Bruce Pearson (DeNiro), a catcher with little talent or intellect. Their friendship deepens when Pearson is diagnosed with a terminal illness he wants to keep from the team. As the season progresses, Pearson gets a small taste of the success that has eluded him up until this point. As Wiggen enjoys one of his best seasons; he spends his time working to keep his friend and catcher healthy enough to finish out the year.

Mark Harris wrote the novel and the screenplay this classic baseball film is based on. This was the second version of the story to be filmed. The first was a television drama starring Paul Newman that aired in 1956. John D. Hancock (Prancer) directed this emotional drama, which is his best film to date. The movie stars a young Robert DeNiro (The Mission), Michael Moriarty (Pale Rider), and Vincent Gardenia (The Hustler).

The story is an emotional drama built on the friendship of Wiggen and Pearson. Thanks to good writing, this stays one step ahead of predictable. Despite some immediate concessions in the plot, the journey remains entertaining due to the emotional content of the characters. Built around a season in Major League Baseball, the relationship between the players progresses as the team does as a whole.   Overall, this is predictable, but somehow manages to be compelling throughout.

The acting in this one is good from the main characters. Unfortunately, outside of DeNiro, Moriarty, and Gardenia; the cast seems to fall a little flat. For Robert DeNiro this was part of his breakout year. After this film and Mean Streets came out, DeNiro became a known talent. Michael Moriarty also does a great job in this one, the third major film of his career. Vincent Gardenia is also really great in this film, and it earned him an Oscar nomination for Best Supporting Actor. Thanks to the great work of a handful of the actors this movie is still enjoyable and carries the emotional content necessary for the story.

From most aspects outside of the story and the acting, this one shows its age, sometimes painfully. The score and the techniques used throughout the movie all seem to scream 1970s. There are good aspects in the production of the film as well. The locations used all give a sense of authenticity to the story. The movie was filmed at legendary baseball stadiums like Yankee Stadium and Shea Stadium. Major League Baseball also allowed the filmmakers to use footage of baseball greats like Brooks Robinson and Tony Perez.

This is a great addition to the world of baseball films. The acting and the story seem to succeed even with the flaws of the movie. I would suggest this to anyone who loves the actors in it. I would also suggest this one to fans of baseball movies and dramas. This is similar in feeling to films like The Other Side of the Mountain or Love Story. I give this one 3.7 out of 5 stars.