When singer Velma Kelly and musical hopeful Roxie Hart wind up in prison for separate crimes, they find themselves contending for the publicity that might save them from the gallows.  The pair is also fighting for the attention of their slick attorney Billy Flynn. With Flynn pushing them into the spotlight, the women are also forced to fight with one another for the attention they seek. As their trials approach, the stakes continue to rise.

This musical started as a stage play by Maurine Dallas Watkins (Easy to Wed). Later that play became a book thanks to Bob Fosse (All That Jazz) and Fred Ebb (Liza). Finally, Bill Condon (Kinsey) took the book and developed the screenplay that director Rob Marshall (Memoirs of a Geisha) used when making this film. Bill Condon earned an Academy Award nomination for his writing on this one, and Rob Marshall was nominated for Best Director. The movie stars a huge cast of familiar faces including Renee Zellweger (Cold Mountain), Catherine Zeta-Jones (The Terminal), and Richard Gere (Days of Heaven). The film also features John C. Reilly (We Need to Talk About Kevin) and Queen Latifah (Valentine’s Day) amongst many more talented actors. The big prize for this film was the Best Picture Oscar it took home against some great movies. Altogether the movie earned 13 Oscar nominations, winning six times.

Visually, this is an impressive film from beginning to end. The production was designed mainly to work like a play being performed on the stage. Still, throughout the film, the stage seems to expand and contract as needed. This gives the movie a very distinct look and feel that accentuates the musical numbers. Additionally, the lighting and costume design are two more standout aspects of the movie. Throughout the film, the character’s costumes are wonderfully done. Their look always seems to relate perfectly to what’s happening in the scene. Overall, this is a great movie from a visual standpoint. The result of these successes were Oscar wins for Best Editing, Best Art Direction – Set Decoration, and Best Costume Design. Cinematographer Dion Beebe was also nominated for Best Cinematography for the excellent camera work on this one.

The music in this one is pretty nice. Although it works perfectly for the film, none of it was the kind of song that I’ll have stuck in my head. Unlike The Wizard of Oz or Annie the movie lacks any song that is truly memorable. Like I said, this is perfect music for the film, I just don’t think I’m in a rush to buy the soundtrack. The actors all do a nice job with the musical performances as well. Queen Latifah deserves a ton of credit for really pulling off the best musical performance of the entire film. 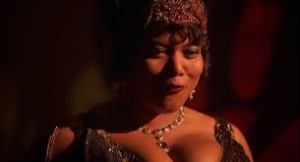 Speaking of performances, the film is full of great work from a very talented and diverse cast. Zellweger and Catherine Zeta-Jones do a nice job with their roles in the film. Renee Zellweger was nominated for Best Actress for her work in this film. Ultimately, she lost out to Nicole Kidman for The Hours. I was surprised to see Catherine Zeta-Jones beat out some talented actresses to win her Oscar for Best Supporting Actress over Queen Latifah. Richard Gere is excellent, playing the bold and egotistical hotshot attorney. John C. Reilly also earned an Oscar nomination for Best Supporting Actor for his nice work on this one. The standout for me in the acting department is still Queen Latifah. Throughout the movie she seemed far more comfortable with the musical aspects of the film. This comfort level seemed to translate to the rest of her performance, and I think she was most deserving of an Oscar from this entire cast. 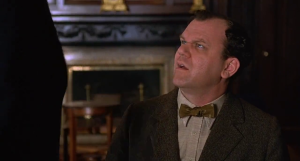 The story is where the whole thing came undone for me. Despite the great visuals and nice music, the story just seems to come out a bit predictable and very flat. With the effort put into the music and the visual aspects of the film, I think I expected a story to match. Instead the story seems like an afterthought. It’s not that the premise isn’t interesting, it’s that the execution wasn’t there. I think most fans of musicals will still enjoy this one, but I’m not sure about casual movie watchers.

As far as Best Picture winners are considered, this is a puzzler for me. The movie won over some pretty great films, like Gangs of New york, The Hours, and The Pianist. Still, if you’re a fan of musicals, this is one worth checking out. Despite the lack of substance, the film delivers in all the musical and visual areas making it fun to see. I would also recommend this one to fans of any of the stars. It’s always fun to see someone doing something a little outside of their normal performances. I give this one 3.5 out of 5 stars.