Based on the novel by Rachel Cohn and David Levithan

Nick O’Leary (Cera) is trying, however unsuccessfully, to get over his breakup with Tris. When his friends and band mates learn of a secret concert in New York they convince him to go out for the night in search of the show. When Nick meets Norah (Dennings), she asks him to pose as her boyfriend for a minute. This leads the two on a journey throughout the city in search of the concert. Along the way they’re forced to locate and relocate their friends who have gotten into their own little adventures. Will they find the concert, or something else as they travel throughout the night?

This movie is based on the novel of the same name, written by Rachel Cohn (Naomi and Ely’s No Kiss List) and David Levithan. The book was adapted by Lorene Scafaria (Seeking a Friend for the End of the World) and directed by Peter Sollett (Raising Victor Vargas). The movie features a number of young actors including Michael Cera (Scott Pilgrim vs. the World) and Kat Dennings (Thor: The Dark World). 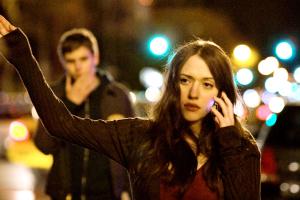 As far as the story is concerned, this is a whimsical look at young love and heartbreak. The smaller details of the story are almost entirely unimportant, the focus remaining on Nick and Norah. Despite being predictable and overly sentimental, this still has some charm and a lot of comedic moments built-in. The story also does a good job of not trying to be more serious or profound than it is capable of being. The major flaw in the writing is the alternating tones of the film that range from SNL alumni film to something trying to be a John Hughes film (Sixteen Candles). Despite the flaws, this does remain entertaining.

The actors do a decent job with the material given to them. The story fits the actors nicely and this works to their benefit. In addition to nice work from Cera and Dennings, the cast is filled with familiar faces that do good work in supporting roles. Overall, this wasn’t destined to win anyone any awards, but it’s got enough good acting to keep things going.

Overall, this is a movie designed to reach a younger audience and it shows. If you’re a fan of teen movies, or of the way Hollywood pushes pop culture, this is one you might enjoy. I would also recommend this to fans of the actors since it shows off the stars just as you’d expect. There is a hidden charm to this one, but it might be best filed under “guilty pleasures” when it comes to my rating. I give this one 3 out of 5 stars.