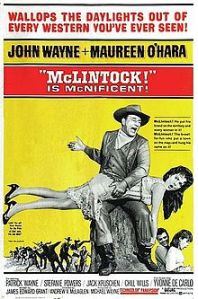 George Washington McLintock is “GW” to his friends and Mr. McLintock to everyone else. As a wealthy cattle rancher he’s living life the way he wants to. This comfortable existence is only interrupted when his estranged wife (O’Hara) returns to welcome their daughter (Powers) home from school. Now McLintock is forced to deal with the many issues that led to his wife’s departure. Her strong will and his stubborn nature lead them into a number of comical confrontations as they sort out their feelings.

Not every Western needs a shootout and a villain. This film is a great example of the lighter version of filmed Westerns. The story was written by James Edward Grant (The Sheepman) and directed by Andrew V. McLaglen (Bandolero!). The movie stars the iconic John Wayne (The Longest Day) opposite Maureen O’Hara (How Green Was My Valley). The cast also includes Patrick Wayne (The Alamo), Stefanie Powers (Herbie Rides Again), and Jerry Van Dyke (Love and Kisses).

This movie is an interesting mix of Western styling and modern American comedy. Using the backdrop of the early American territories, the writing puts together a story that would’ve easily worked in any era. The comedy is predictable at times, but stays playful and entertaining throughout the film. The writing also includes some great dialogue between Wayne and pretty much everyone else. The back and forth moments between Wayne and O’Hara are highlights of the movie as well.

The acting is good, but not great. A lot of this comes from the material the actors were given to work with. John Wayne and Maureen O’Hara are the two stars of the film and they do a great job with their roles. Their chemistry is evident throughout the movie and this brings something special to their performances. The rest of the cast does a good job with a few actors standing out a bit more than others. One of my favorite performances comes from Jerry Van Dyke. He manages to work the comedy side of his role perfectly, and it keeps things fun.

Visually, this could have easily become a major Western epic. The scenery and set design seem to be ready for anything. The costuming also works nicely since it doesn’t appear to be a cheap imitation. This is one of the more interesting aspects of the film since it combines elements from epic films into a comedy. From all aspects, this is a visually entertaining film.

Overall, this is a good movie and a must-see for fans of Wayne. I would also recommend this to fans of Westerns in general. This is a fun movie that will work for the whole family. One interesting aspect of the movie is the combination of the big broad Western imagery with the comedic elements of the movie. I give this one 3 out of 5 stars.