As early as 1957, John Ford (How Green Was My Valley) was working on making a film about the exodus of the Cheyenne Indians. Initially he had written a screenplay with his son Patrick Ford (Wagon Master), but nothing came from this work. Eventually, his idea blended with the novels Cheyenne Autumn by Mari Sandoz and The Last Frontier by Howard Fast (Spartacus). The final screenplay was completed by James R. Webb (How the West Was Won). When the studio got involved, they insisted on casting Ricardo Montalban (Battleground) and Gilbert Roland (The Bad and the Beautiful), both of whom they considered big box office draws at the time. The cast later grew to include a number of big names including Richard Widmark (Judgement at Nuremberg), Carroll Baker (Giant), Jimmy Stewart (Mr. Smith Goes to Washington), and Edward G. Robinson (Double Indemnity). The cast also features Karl Malden (A Streetcar Named Desire), Sal Mineo (Rebel Without a Cause), and John Carradine (The Grapes of Wrath). Ultimately, Ford’s idea for a small docudrama morphed into a great Western epic. For Jimmy Stewart, this would be his third and final film with John Ford in the director’s chair. They had previously worked together on Two Rode Together and The Man Who Shot Liberty Valance.

The United States government has failed to provide for the Cheyenne people as promised in their treaty. Now, led by Chiefs Little Wolf (Montalban) and Dull Knife (Roland) the Cheyenne leave the reservation to return to their traditional home in Wyoming. Now Captain Archer (Widmark) is forced to lead his troops in pursuit of the Cheyenne. Despite his sympathies for their suffering, he’s determined to do his duty. Now the Cheyenne are pushing forward on their 1,500 mile march home. Their journey is filled with hardship and suffering as they attempt to reclaim their homeland. 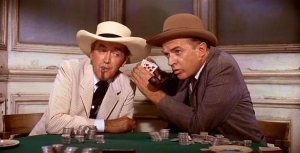 This is an interesting film from a number of aspects. The fact that the film focuses on the Cheyenne instead of the Army or the other people involved is unique to the era of film making. Unfortunately, the movie also attempted to pander to the wider audience with the addition of scenes involving Dodge City and Wyatt Earp (Stewart’s role). This break in the solemn and honest flow of the film feels out-of-place. The second half of the movie never quite regains the momentum lost after the strange comedic moments of that sequence. The film also suffers due to the episodic nature of the screenplay. The movie seems a bit disconnected due to the change in pace and emotional content from one moment to the next.  Overall, the film pushes for a dramatic conclusion, and succeeds on some levels. The film does take creative license with the history, making it a Hollywood interpretation of the true story.

The acting in this movie is good from all of the big names throughout the movie. Today it’s hard to swallow the casting of white people in makeup as Cheyenne, but it’s a part of the history of movie making. In this film, the actors did a good job bringing some sense of dignity to their roles, especially those of the Cheyenne leaders. The cast also featured a number of Navajo people who add somewhat to the authenticity despite the different tribal backgrounds. For Jimmy Stewart, this was a smaller role, and mainly a forgettable one. In his defense, the sequence in Dodge City feels hastily put together and massively unimportant to the story. The acting from Montalban, Roland, and Baker is some of the best in the film. Widmark also does a great job playing the conflicted military leader. Overall, the acting in this film is good, but doesn’t bring anything special out of the actors.

The camera work and sets used in this movie are wonderful. The great trademark of John Ford was his use of the world around him when making a film. This time he took full advantage of the Arizona and Utah locations he filmed in. The epic nature of the story is captured wonderfully in the visuals. Cinematographer William H. Clothier (McLintock!) would be nominated for Best Cinematography for his work on this movie. This would be the only Oscar nomination for the film. Additionally, the film also features a great score by Alex North (A Streetcar Named Desire), a fifteen time Oscar nominee.

This would end up being little more than a detour in the career of Jimmy Stewart. Following this film he would get back into the spotlight with films like Shenandoah and Flight of the Phoenix. Moving into the sixties, Stewart found new kinds of success as he moved away from his days as a romantic lead, and into successful work in more mature roles.