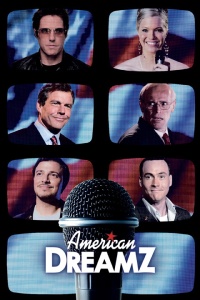 Written and directed by Paul Weitz

American Dreamz is the hottest show on television. Every season, host Martin Tweed (Grant) watches over the hopeful contestants vying for their chance at stardom. This time things have changed, with the President of the United States (Quaid) looking to rehabilitate his image with an appearance on the show. Without knowing it, the new contestants are going to be part of the biggest season of American Dreamz yet.

This film was written and directed by Paul Weitz (Being Flynn). The movie failed to cash in at the box office despite a cast with a number of familiar faces. This includes Hugh Grant (Love Actually), Mandy Moore (Tangled), and Dennis Quaid (The Rookie). The cast also includes Willem Dafoe (Platoon), Sam Golzari (21), and Chris Klein (We Were Soldiers).

The premise of this film is an interesting one, although overdone by a number of other spoof films. Unfortunately, this one took the political route and became overly one-sided and predictable. The writing created the President as a rough outline of George W. Bush, which would’ve worked if it had been more thought out. Instead that portion of the film brings down the rest of the movie with an overdone push to make fun of the Conservative points of view. The film also relies far too heavily on the stereotypes of the people being portrayed. Overall, this one is predictable and unimaginative from beginning to end.

The acting in this movie runs the range of good to terrible. On the good side are the work of Hugh Grant, Mandy Moore, and Sam Golzari. On the less good side is everyone else. Despite being two of my favorite actors, Dafoe and Grant both failed to bring this movie up in any way. The supporting characters are good, but they just don’t have enough substance to make an impact overall. I guess even good actors get stuck in bad roles sometimes.

Paul Weitz wrote and directed this 2006 dud, but if I were him I might not take credit. Despite his great work on a number of my favorite films, this one just falls flat. This film is an attempt at satire that’s so on-the-nose from beginning to end that it feels unimaginative and predictable. Despite clear intentions, the film lands somewhere between successful satires and those annoying spoof movies of the last few years. If you’re a fan of really bad movies you might enjoy this one, but I’m not going to recommend it to anyone. I give this one 1 out of 5 stars.