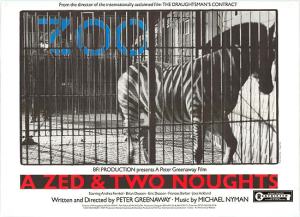 Written and directed by Peter Greenaway

Oliver Deuce (Eric Deacon) has just lost his wife in a tragic and bizarre accident involving a strange woman (Ferréol) and a rare bird. The strange woman, Alba Bewick survives but loses a leg. Meanwhile Oliver’s twin brother Oswald (Brian Deacon) is working on a study of decomposition at the local zoo. When he comes to comfort his brother, the two men find themselves in an awkward relationship with the eccentric Bewick. As their relationship grows, so do the questionable activities of the pair. Behind it all is their desire to understand the human condition.

This unique film was the brainchild of Peter Greenaway (The Draughtsman’s Contract) who both wrote and directed it. For Greenaway, this is one of many films he’s made over several decades as a writer and director. The film features a unique cast that includes Brian Deacon (The Triple Echo), Eric Deacon (Yesterday’s Hero), Frances Barber (Photographing Fairies), Joss Ackland (The Hunt for Red October), and Andréa Ferréol (The Last Metro). The film was released in 1985 to mixed reactions. The cinematography in this movie is unique and often amazing. The work was done by Sacha Vierny (Hiroshima Mon Amour) whose work spanned five decades and multiple genres. Greenaway would refer to Vierny as his “most important collaborator”.

The story written for this film is bizarre and unique. The underlying themes of death and loss are underscored by the dramatic nature of the characters within it. The story searches out the worst outcome from almost every situation, but somehow it doesn’t feel dreary. The story also allows the relationships between the characters to push into extreme and unorthodox regions. This creates some awkward moments throughout the movie. Overall, this one seems designed to make the viewers uncomfortable while keeping them interested due to the shock value of the visuals.

As stated above, the visuals were designed to keep the audience involved. The color schemes, costuming, lighting, and camera work all push things to the extreme. From those aspects, this is a wonderfully made movie. The set design is one of the more interesting I’ve ever seen. The finished product often feels like a cross between science-fiction and horror. If it seems like this description borders on vague, that’s because this is an incredibly hard film to describe. Overall, the visuals are interesting enough to make the film worth watching.

It’s also important to point out that this film features a really nice score. Somehow the music seems to keep the film moving at one steady pace without wavering. This works to the film’s benefit at times, and at other times it seems to add to some excruciating anticipation. The film operates on the idea that something bad is just around the corner. The music in this movie plays right along with it. 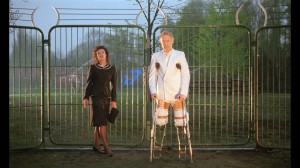 It’s tough to describe the work of Peter Greenaway. His work is unique and emotionally driven, but somehow feels disconnected at the same time. This disconnect might not work for a wide audience, especially with the theme of death hanging over it. If you’re a fan of great cinematography and art direction this is one worth checking out. I would also suggest this to film students looking to see what a camera can do. I give this one 2.5 out of 5 stars.