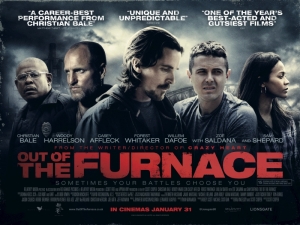 Rodney Baze Jr. (Affleck) has been to war, and now he’s trying to get ahead in life. Unfortunately, his attempts have created gambling debt that he’s struggling to pay. Meanwhile, his brother Russell (Bale) is struggling to fix a life that’s been sabotaged by poor choices. When Rodney turns to John Petty (Dafoe) to help him make some money, he finds himself involved with Harlan DeGroat (Harrelson), a sadistic criminal. Now Rodney is missing, and Russell is taking it into his own hands to find out what happened.

The acting in this movie is excellent from every one of the stars named above. In addition, the supporting cast all does a great job bringing this small segment of the world to life. Woody Harrelson is at his best as the heartless criminal, Harlan Degroat. Christian Bale and Casey Affleck are also great in their roles. The chemistry between the two works perfectly in creating the conflicted relationship between brothers. The addition of great performances by Dafoe, Whitaker, Shepard, and Saldana brings a lot out of the movie as well. Unfortunately, the story doesn’t keep up with the acting and misses the chance to capitalize on these great actors.

The story starts off strong, and uses a great setting to put together the baseline for the film. The characters are all nicely developed and the conflict is strong. Unfortunately, the film seems unsure about the way it ends. Without giving away the ending, it just seems to take an abrupt and sudden easy way out. With the great acting and strong start, this is still enjoyable. The overall experience just seems to miss out on the potential of the characters and the premise.

The technical aspects of this movie are all nicely handled. The cinematography is beautiful, and really nicely takes advantage of the locations. The use of light in this movie is something that stood out among the number of things done nicely in this film. The score is also a nice addition to the movie, although nothing spectacular.

This movie misses the mark as much as it hits the mark, leaving a very incomplete feeling to the film. Luckily, the acting makes up for a lot of the weakness in the story. I would suggest this to fans of the stars who all do nice work. If you’re a fan of gritty dramas, this is still one worth checking out. The movie is dark and often callous when it comes to the lives of the characters, so this might not work for everyone. I give this one 3 out of 5 stars.