Based on the serialized story by Borden Chase

Thomas Dunson (Wayne) crossed the Red River with the intent of building his own cattle ranch. Fourteen years later, he has a herd that numbers more than 10,000. Alongside his adopted son Matt (Clift), Dunson is attempting to take his cattle North to Missouri. Dunson’s belief in getting to Missouri, and his fiery temper quickly become points of contention as the drive wears the men down. This contention soon creates a dangerous situation that leads Matt to take over the herd. Now Dunson has sworn revenge, pursuing Matt in a blind rage. 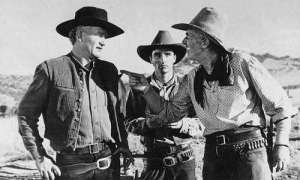 This classic Western came from a serialized story, titled Blazing Guns on the Chisolm Trail, written by Borden Chase (Winchester ’73) and published in the Saturday Evening Post. Later Chase paired up with Oscar-winning writer Charles Schnee (The Bad and the Beautiful) to write the screenplay for this film. The movie was directed by Howard Hawks (The Big Sleep), and second unit director Arthur Rosson (Boots of Destiny) was given credit as co-director for his work on the film. The cast features a great collection of actors starting with John Wayne (McLintock!) and Montgomery Clift (From Here to Eternity). The cast also includes Joanne Dru (She Wore a Yellow Ribbon), Walter Brennan (Kentucky), Coleen Gray (The Killing), Paul Fix (El Dorado), and John Ireland (Spartacus).

The story written for this film is a great one. Instead of following the formula of heroes and villains, the film creates conflict for every character. The conflicts are not only physical, but moral, and lead to excellent moments throughout the film. The movie also features great dialogue that is surprisingly sharp, avoiding most of the clichés common in Westerns. From a writing standpoint, the movie also seems to help the pace of the film stay consistent. Overall, this a wonderfully written movie that earned an Oscar nomination for Best Writing.

Interestingly, the screenplay also caused a certain amount of controversy. After the release of the film, Howard Hughes sued producers of Red River over the ending of the film. He argued that the ending came from the film  The Outlaw which Hawks had worked on for Hughes. Eventually, the original ending of the film was changed to accommodate Hughes’ demands. 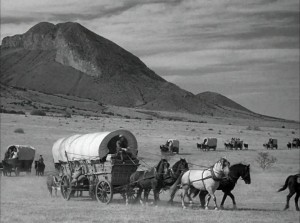 More often than not, John Wayne found himself cast in the role of hero. This film features a different part for the legendary actor. His performance led longtime collaborator Howard Hawks to say, “I didn’t know the big son of a bitch could act!”. In addition to a strong performance by Wayne, Montgomery Clift does a wonderful job in his role. His performance is strong and often silent, creating a nice contrast with Wayne. The cast also features great work from Oscar-winner Walter Brennan. Additionally, Joanne Dru, Coleen Gray, Paul Fix, and John Ireland also do great work. The acting, as a whole, really works nicely in bringing this epic story to life. 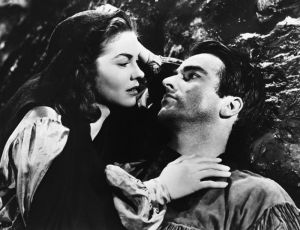 This movie features some nice cinematography. The locations and sets used for the movie all seem to fit in perfectly with the feel of the story. The film earned another Oscar nomination for Best Editing thanks to the work done by Christian Nyby (The Big Sleep). He managed to keep the pace of this epic film moving along from beginning to end. He was also able to make the necessary adjustments to accommodate the rewritten ending. Finally, the score for the film, by Dimitri Tiomkin (High Noon), is really great. Overall, this movie found great success in the technical aspects.

This is a Western for anyone who loves Westerns. For John Wayne fans, this is easily one of the best parts he ever played. I would also suggest this film to fans of drama or history since the film pushes those aspects of the story as well. I give this one 5 out of 5 stars.