Based on the novel To Kill a Mockingbird by Harper Lee

Atticus Finch (Peck) is a small town lawyer raising his two children, Scout (Badham) and Jem (Alford), on his own. When he’s asked to defend Tom Robinson (Peters), a black man, against a charge of raping a white woman, he takes the case. As he begins to uncover the injustice in the case, he’s forced to defend himself against the prejudice of the community. Along the way he also has to defend his children, and teach them how to rise above the prejudices around them. 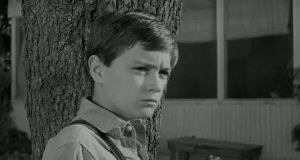 The novel To Kill a Mockingbird was immediately successful upon being published in 1960. The talented author Harper Lee wrote the novel, winning the Pulitzer Prize. Two years later, the story was adapted for the big screen by Horton Foote (Tender Mercies). His screenplay earned him an Oscar for Best Writing, Based On Material From Another Medium. The film was directed by Robert Mulligan (The Man in the Moon). This was one of three Oscars won by the film, having been nominated for a total of eight awards. The cast features Gregory Peck (Roman Holiday), Brock Peters (Soylent Green), Mary Badham (This Property is Condemned), and Phillip Alford (Shenandoah). Also featured are John Megna (Hush…Hush, Sweet Charlotte), Frank Overton (12 O’Clock High), and Robert Duvall (Open Range).

If one role could ever define an actor’s career, this was that role for Gregory Peck. Despite a long career with dozens of great performances, this might stand out as his shining moment. His work on this film earned him his only Academy Award. His young co-star Mary Badham, was also nominated for an Oscar for Best Supporting Actress. The cast also features nice work from Peters, Alford, Megna, and Overton. In an early film appearance, Robert Duvall does a good job with his small role in the movie. The rest of the cast is also good, helping to create the world of the deep South with depth and honesty.

The film is based on a novel that is now considered a classic piece of American literature. Taking such a great story from the novel to the big screen took great skill from Horton Foote. His adaptation remained true to the book in every aspect. Harper Lee would later say “that film the man and the part met… I’ve had many, many offers to turn it into musicals, into TV or stage plays, but I’ve always refused. That film was a work of art.” Her satisfaction came from the legendary performance of Gregory Peck and the way that the story was honored in the film. This is one of the truly great American masterpieces, as a film and as a novel.

In addition to the Oscar wins and nominations mentioned above, the film was also nominated for Best Picture, losing to the epic Lawrence of Arabia. The other nominations included Best Director, Best Cinematography, and Best Score. The visuals and the music are wonderfully done for this movie. Cinematographer Russell Harlan (Witness for the Prosecution) did great work in creating the world of this story. Elmer Bernstein (The Magnificent Seven) took the movie and added an emotional layer with his excellent score. 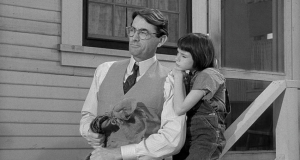 The success of this film comes from the performance of Gregory Peck. He proved that once in a while a single actor can take over a film and create something special. This movie came out of the beautiful novel by Harper Lee, giving Peck and the rest of the cast great material to work with. Harper Lee would comment, “When he (Peck) played Atticus Finch, he had played himself, and time has told all of us something more: when he played himself, he touched the world.” This is a beautiful film that anyone and everyone should see. I give this one 5 out of 5 stars.