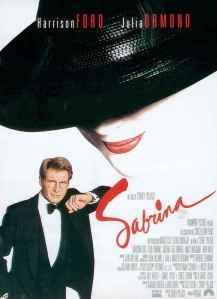 Based on the stage play by Samuel A. Taylor

Also based on the screenplay by Billy Wilder, Samuel A. Taylor, and Ernest Lehman

Sabrina (Ormond) has spent her entire life peering into the world of her father’s wealthy employers, the Larrabees. After heading to Paris as an awkward young student, she returns to her home as an elegant woman. Her reappearance soon gets in the way of family business when David Larrabee (Kinnear) begins to make advances to her despite his own engagement. His fiancée is the daughter of a wealthy businessman has created new opportunities for the family. Those deals might be in jeopardy as his commitment wavers. Now Linus (Ford), his older brother, has decided to take things into his own hands to save the business opportunities. As Linus begins to spend time with Sabrina a relationship begins to materialize. Now Linus has to decide between good business and being a good man. 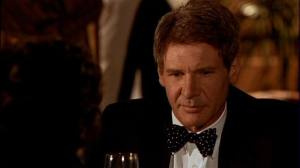 This is a charming remake of the Samuel A. Taylor (Vertigo) stage play that was also a successful 1954 film starring Humphrey Bogart (The African Queen), William Holden (Network), and Audrey Hepburn (Charade). This story was originally developed for that film by the talented trio of Billy Wilder (The Apartment), Samuel A. Taylor, and Ernest Lehman (West Side Story). The 1995 screenplay was put together by Barbara Benedek (The Big Chill) and David Rayfiel (The Firm). Like the 1954 film, this one features a great cast. The stars for this one include Harrison Ford (Ender’s Game), Julia Ormond (My Week with Marilyn), and Greg Kinnear (As Good as It Gets).

This story began with a stage play, but really took on its current form when Billy Wilder and Ernest Lehman took hold of it. Their interpretation of the story strays from the stage play, but has a charm of its own. Instead of an ugly duckling story, this seems to dig deeper, giving Sabrina a self-awareness that works wonderfully in the second half of the movie. The dialogue is sentimental and witty, with humor throughout. While this story doesn’t really do anything new it also doesn’t have any failings. It’s a simple and heartwarming romantic comedy that is enjoyable every time I watch it.

The acting in this movie is surprisingly wonderful, especially from the starring trio or Ford, Ormond, and Kinnear. Greg Kinnear does a really good job as the less responsible younger brother. Kinnear also seems to know how to bring out the humor in his role, which makes for some great scenes in this one. Harrison Ford also does a good job as the uptight older brother and businessman. His character is a complex one, and Ford does a good job making the right adjustments as the story moves forward. Additionally, the chemistry between Julia Ormond and Ford is wonderful in this movie. Overall, the cast do a great job with this script. The humor and romance blend together for a wonderful movie.

This is a good movie that flew under the radar for many audiences when it was released in 1995. The film earned Oscar nominations for Best Original Song, and Best Original Score. Despite relatively good reviews, this was not a financial success. Some of this can be attributed to the fact that a remake of a classic always seems to suffer to comparisons. If you’re a fan of the stars of this one, or the original movie, this is one to see. I would also recommend this to anyone who loves romantic comedies. I give this one 4 out of 5 stars.