Based on the novel by Anne Fine

Daniel Hillard (Williams) is reeling from his recent divorce from wife Miranda (Field) and the loss of his time with his children (Jakub, Lawrence, WIlson). When he finds out that Miranda is looking for a housekeeper, Daniel transforms himself into the elderly Mrs. Doubtfire so that he can spend more time with his children. Now he’s got to juggle his separate lives to keep Miranda and his children in the dark about his new identity. 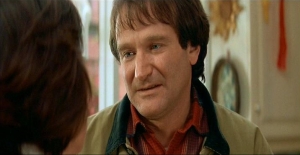 This is a childhood favorite of mine, and an excellent family comedy. The story came from the Anne Fine novel Alias Mrs. Doubtfire. She originally published the book in 1987. The adaptation was handled by screenwriters Randi Mayem Singer (Tooth Fairy) and Leslie Dixon (Limitless). Director Chris Columbus (The Help) took on the project which had a cast of big names including Robin Williams (The Fisher King), Sally Field (Forrest Gump), and Pierce Brosnan (The World’s End). The cast also features Lisa Jakub (Independence Day), Matthew Lawrence (The hot Chick), and Mara Wilson (Matilda).

This movie is wonderfully written to take advantage of the genius of Robin Williams. Every moment in the movie seems to set up the next great display of his energy. Thankfully, the movie also features a script that doesn’t ignore the rest of the cast. The balance between the stars allows this to become a well-rounded story from beginning to end. The dialogue in this one is a nice mix of seemingly improvised moments, and heartfelt sentiment shared between characters. The end result of this story is a simple heartwarming film that works nicely without taking any major twists.

The acting in this movie begins and ends with a wonderful performance from Robin Williams. His comedic genius is nicely played alongside more emotional moments in the movie. Despite his energy level, nothing seems to be pushed too far. He’s also blessed to have Sally Field and Pierce Brosnan to share the screen with. They both do great work, allowing their roles to play alongside Williams without seeming to compete. Finally, the acting from Lawrence, Jakub, and Wilson is perfect. Their roles as William’s children work nicely in making their little family believable. This is a wonderful movie for the whole family thanks to the performances of everyone involved. 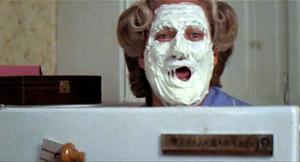 This is a great family movie. It doesn’t do anything unique or risky, but relies on a good story and good acting to bring home the message. The makeup work done for Williams earned the movie an Oscar for Best Makeup. The rest of the technical aspects of this one are also nicely handled. Overall, this is one that everyone should see. I give this one 4.6 out of 5 stars.