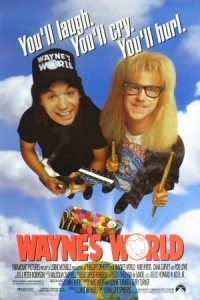 Wayne Campbell (Myers) and Garth Algar (Carvey) are public television icons in the small town of Aurora, Illinois. While enjoying their small dose of fame, the two are approached by Benjamin Kane (Lowe), an executive who offers them a chance to bring their show to network television. Now Wayne and Garth are learning the cost of selling out to big business. As they fight to keep their show, Wayne is also fighting to keep Cassandra (Carrere), his new girlfriend who’s being wooed by Kane. Only luck will make sure the two can party on.

This movie is based on the classic SNL skit Wayne’s World which starred Mike Myers (Austin Powers) and Dana Carvey (The Master of Disguise). The sketch aired multiple times during a five-year run from 1989 through 1994. The movie came to life with Mike Myers, Bonnie Turner (The Brady Bunch Movie), and Terry Turner (Tommy Boy) writing the script. The film was directed by Penelope Spheeris (Black Sheep). The cast for this one starts with Mike Myers and Dana Carvey, reprising their popular roles from SNL. In addition, Rob Lowe (The Outsiders), Tia Carrere (True Lies), and Lara Flynn Boyle (Mobsters) are all a part of the cast. 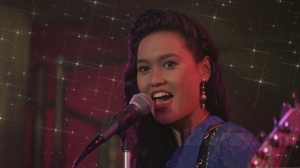 This story didn’t need much to make it enjoyable. Simply taking the premise of the popular SNL skit and putting it into a bigger world seemed to work wonders. The dialogue is hilarious, allowing Myers, Carvey, and the rest of the cast to shine. The basis for every scene borders on ridiculous, which somehow works better than a more serious attempt might have. The writers really just gave the stars a way to make magic with established roles. This is one of the better, if not the best SNL based movie made. 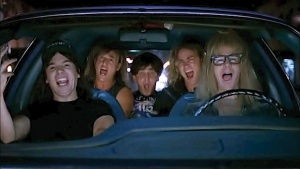 The acting is really all about Myers and Carvey. Every joke, gag, and scene seems to work perfectly with these two at their best. For both of them, this is as good as it gets. Thankfully, these two didn’t have to make this movie on their own. Rob Lowe does a great job as the greedy executive, playing up his looks and charm opposite the two awkward stars. Tia Carrere and Lara Flynn Boyle also did great work in their roles. Overall, the cast did good work with this silly and hilarious script.

This movie has become an enduring comedy classic since it was released in 1992. The box office success came alongside the critical approval for this unique film. One of the wonderful aspects of this movie is the fact that the flaws don’t matter. In fact, the story as a whole is merely a vehicle for the comedy within. If you’re a fan of the SNL alumnus and their films, this is one you need to see. I would also suggest this for fans of goofy comedies like Dumb and Dumber or Billy Madison. I give this one 5 out of 5 stars.