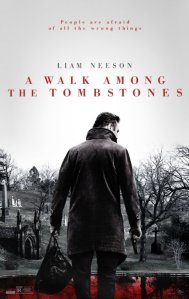 Former policeman Matt Scudder (Neeson) has been hired to find men behind the brutal murder of a young woman. As he begins to investigate, he finds out that more than one woman has fallen victim to the killers. As he digs for answers, he’s also forced to face his own demons. Now he’s got to put together the pieces to try to stop the men from killing again.

This film is based on a novel of the same name. written by Lawrence Block (My Blueberry Nights). The film was written and directed by Scott Frank (Minority Report). The cast is led by Oscar-nominated actor Liam Neeson (The Mission). The cast also includes Dan Stevens (The Guest), David Harbour (End of Watch), Adam David Thompson (Martha Marcy May Marlene), and Eric Nelsen (Night Has Settled).

I went into this movie thinking it was likely to be another incarnation of the character Neeson made famous in Taken. Thankfully, that’s not how this story plays out. Although the character Neeson plays doesn’t stray too far from recent efforts, this character seems deeper and far more complex in his motivation. The pace of the film is pretty smooth and the story comes out of the gates quickly. The characters are interesting, but perhaps a little too shallow in their development. Although the characters are interesting, some of them would have been far more interesting with some background. Still, this one has enough intrigue, action, and story to work nicely from beginning to end.

The acting in this movie is really nicely done. It might be fair to say that Neeson is in his element with films like this. He gives a performance that’s got a lot more depth than I expected. Mainly, his character feels far more vulnerable than I thought he would be. The rest of the cast all do a great job in their roles. Dan Stevens and David Harbour are really great in their respective roles. Each of them bringing out the flaws and unique characteristics of their characters. Overall, this one has some really good acting from all involved.

The locations used in this film really work nicely as the story unfolds. The action is all portrayed with the brutal honesty that I have come to expect from the movies that Neeson chooses to do. The cinematography does a good job helping to keep the tension high and the suspense intact. Credit should also be given to the score and the editing for this success. Overall, the production on this movie was nicely done.

This is a nice movie that exceeded my expectations. For fans of Liam Neeson, this is a great new movie to enjoy. I would also suggest this to fans of thrillers or revenge films. This is filled with some gritty violence, so it might not work for everyone. Finally, I would suggest this to people who like dark films like No Country For Old Men since it doesn’t hold back when things get rough. I give this one 3.8 out of 5 stars.