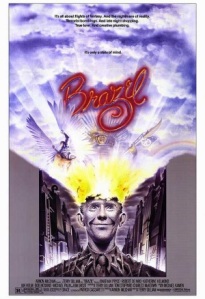 Sam Lowry (Pryce) has existed peacefully, and under the radar, as a mid-level government worker. When he uncovers a paperwork error in his department, Lowry begins digging to try to fix it. His search leads him to Jill Layton (Greist), a woman he’s determined to protect. For his efforts, Lowry soon finds himself labeled an enemy of the state. 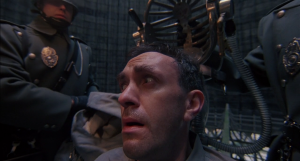 This 1985 film is an interesting science-fiction piece, set in a strange dystopian version of the future. Terry Gilliam (The Fisher King) directed the film. Gilliam also wrote the screenplay alongside Tom Stoppard (Shakespeare in Love) and Charles McKeown (The Adventures of Baron Munchausen). The three writers earned an Oscar nomination for Best Original Screenplay. The cast features an interesting collection of talent. Jonathan Pryce (The New World), Kim Greist (Manhunter), and Robert DeNiro (Silver Linings Playbook) lead off the cast. In addition Ian Holm (The Hobbit: An Unexpected Journey), Katherine Helmond (Fear and Loathing in Las Vegas), and Bob Hoskins (Hook) are also part of this amazing cast. 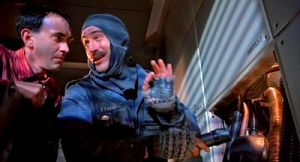 This story is a bit disjointed, working more on the feel than the plot at times. Underneath the chaos is a really great look at politics, government, and social status as seen through 1985’s eyes. Like some of Gilliam’s other films, this is a constantly moving story with a number of things seeming to happen for no reason. Thankfully, Gilliam pays off in the end, helping every aspect to pay off. The dialogue is interesting and unique, and fits the strange world of the film. Overall, this story creates a wonderful world that is unlike any I’ve seen. 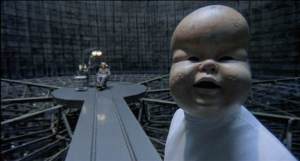 Jonathan Pryce does a great job leading the way with the acting in this film. His role is truly the centerpiece of the film. As the story moves, he’s introduced to a number of new characters that all have unique and wonderful personalities. Kim Greist, Robert DeNiro, and Ian Holm also do great work with their roles in the film. Finally, Katherine Helmond and Bob Hoskins help to round out the wonderful cast. Overall, this film is nicely acted, allowing the eccentricities of the story to shine.

This movie truly creates a new world for the story to exist in. The set design, special effects, and costuming all contribute to a film you can truly immerse yourself in. The action in even unique, planned out with a sense of the strange world it’s happening in.The score, by Michael Kamen (Open Range), is also a great part of this movie.

My one complaint with this film is that it is so busy at times that it begins to lose direction. This is generally only for a moment, but it does make the plot hard to follow. If you’re a fan of films like the Total Recall or the Fifth Element, this might be one for you. I would also recommend this to fans of the stars, or the work of Gilliam. I give this one 4.6 out of 5 stars.