As the world food crisis progresses, a small group of explorers (McConaughey, Hathaway, Bentley, Gyasi) is asked to travel beyond our solar system in search of a new home for the human race. Their trip through the wormhole comes at a huge cost as they are asked to leave their families behind. For Cooper, this could mean choosing between seeing his children again or saving the human race.

This story is an expansive space odyssey that works on the border between hard science and science fiction. The human aspect is wonderfully told through the lives of the few, while it never loses sight of the larger picture. The action could have been the star of this film, but the writing really balances out the character drama within the epic scale of the film. The characters are interesting and unique, and the dialogue is written nicely as well. The movie also features several nice twists and turns that really pay off throughout the film. This is one of the more interesting science fiction films I’ve seen in a long time. The science behind the story is thought out nicely and clearly explained without slowing the pace of the film. 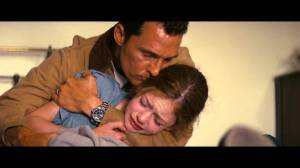 The acting in this movie is really great. Matthew McConaughey leads the way with an emotional and powerful performance. Anne Hathaway does an equally impressive job with her role. The two share a lot of screen time and manage to create an interesting chemistry that works nicely between their characters. Michael Caine was a great choice for his role as the pioneering Professor Brand. Jessica Chastain and Casey Affleck both do a nice job with their roles as well. Adding in John Lithgow, Matt Damon, Wes Bentley, and David Gyasi just adds to the great moments in the movie. There doesn’t seem to be a weak performance among the main cast of characters. One of the surprising successes of this film is Mackenzie Foy’s performance. She’s one of the youngest members of the cast, but she pulls her weight with an emotional performance that’s really convincing. The cast does a great job with the story, really bringing out all of the emotion and drama. 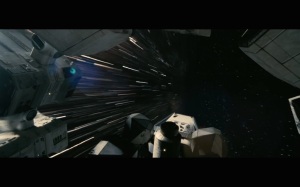 Visually, this is an awesome film. (I was fortunate enough to see this on a 70mm IMAX print.) The special effects, CGI, and other visual aspects of the film are all wonderful. The way the visuals portray the solar system and the galaxies beyond is beautifully done. The sound design also adds a lot to the film. Along with a Hans Zimmer (Gladiator) score, this one sounds incredible.

The editing does a good job throughout the movie, but there are some moments that don’t quite succeed. Mainly, this is the use of cross-cutting that was intended to heighten the suspense. Most of the time it seems to work nicely, but there are a few moments that it becomes a little overdone. It is also fair to say that a little trimming would’ve done wonders to the pace of the second act, as well as the length of the film overall. Still, this looks and sounds great and it won’t disappoint anyone looking for a space film on an epic scale. 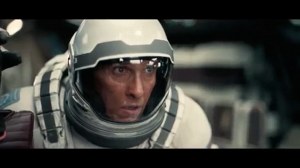 This is a great movie. While it might have some flaws, the overall execution is wonderful. The acting from the stars is wonderful and I wouldn’t be surprised to see some award nominations on the way. If you’re a fan of epic stories, this is one for you. It’s a must-see for fans of McConaughey, Hathaway, or any of the other stars in the movie. I would definitely suggest this to science fiction fans as well. I give this one 4.5 out of 5 stars.