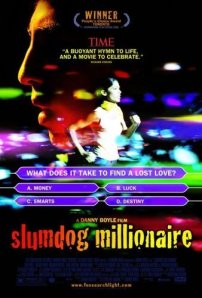 Based on the novel by Vikas Swarup

How does an orphan from the streets of Mumbai acquire the knowledge necessary to make a run at the biggest prize on television. On the set of Who Wants to Be a Millionaire? Jamal has a chance to change his life. The trick is remembering where he’s been.

This movie took Hollywood by storm in 2008, winning Best Picture and seven other Oscars. The story comes from the novel Q & A by Vikas Swarup. The screenplay was written by award-winning screenwriter Simon Beaufoy (127 Hours). The film was directed by Danny Boyle (Trainspotting) and Loveleen Tandan (Monsoon Wedding). The cast features Dev Patel (The Best Exotic Marigold Hotel), Freida Pinto (Rise of the Planet of the Apes), and Madhur Mittal (Million Dollar Arm).

Simon Beaufoy won an Oscar for Best Adapted Screenplay for this film. The story is a powerful one, spanning the tumultuous childhood, youth, and young adulthood of Jamal. Through wonderful flashbacks his life is revealed. These revelations introduce the audience to a number of wonderfully created characters. The world of the film is both exotic and horrifying, leaving the story to feel much like a fairytale. The dialogue in the film seems to get right to the point also, never taking more time from the visuals than needed. That isn’t to say that the dialogue is weak or minimal, only that it seems to say just the right things in just the right number of words. From a story perspective, this one does everything right.

The acting in this movie is wonderful. Dev Patel does a wonderful job playing the grown Jamal. He manages to bring a sense of weariness to his role while maintaining a sense of hopefulness that’s essential to the film. Just as he does a wonderful job, so do the two younger actors who portrayed Jamal at other stages of life. Freida Pinto also put together a great performance. Unlike Patel’s character, she was asked to portray a woman who has lost almost all hope. Her performance is powerful and her chemistry with Patel is perfect for this movie. Madhur Mittal rounds out this talented trio with a great performance of his own. His role called for a wide range of emotion and he does a wonderful job with it. The younger versions of these characters were all nicely played by the other actors in the film. The many antagonists in this film are embodied by a number of great performances throughout the movie.

The visuals in this film earned several honors during the awards season. This movie took home Oscars for Best Cinematography and Best Editing. The cinematography takes advantage of the unique sets and locations perfectly. The editing adds to the constantly increasing tension within the story. The use of color and tone throughout the movie add to the unique styling of this movie. In addition, the locations and set design are incredible. The overall visual presentation of this movie exceeded my every expectation. It’s a unique film with so much to offer in terms of visuals.

The film also earned Oscars for Best Original Score, Best Original Song, and Best Sound Mixing. All of these are just further evidence of the success of this movie. The music is incredible, adding a different energy to the film. The sound also works to increase the feeling of chaos within the city streets of Mumbai. The winning original song, “Jai Ho”, was not the only song to earn a nomination from this movie. “O Saya” was also nominated. In addition, this movie was nominated for Best Sound Editing. From every audio aspect, this one succeeds wonderfully.

This is a powerful film with an emotional thread running throughout it. The payoffs are wonderful and the story is so incredibly unique. If you’re a fan of great drama you should definitely see this one. I would also suggest this to fans of the stars, who have gone on to do other interesting work. I give this one 5 out of 5 stars.