Based on the novel The Grapes of Wrath by John Steinbeck

After losing their Oklahoma farm, the Joad family is headed West to look for work. Soon they’ve joined the masses of people suffering from the Great Depression. As they seek out employment the Joads continue to be met with misfortune.

This film is based on the classic American novel, The Grapes of Wrath by John Steinbeck (Of Mice and Men). The movie itself has become a classic, directed by one of Hollywood’s legendary directors, John Ford (The Searchers).  Ford would go on to win an Academy Award for Best Director for this movie. The screenplay was written by two-time Oscar nominee Nunnally Johnson (The Dirty Dozen). Johnson was nominated for an Academy Award for writing this screenplay. The film features a fantastic cast that includes Henry Fonda (Once Upon a Time in the West), Jane Darwell (Gone with the Wind), John Carradine (The Man Who Shot Liberty Valance), Charley Grapewin (They Died With Their Boots On), and John Qualen (Casablanca).

This is a powerful and emotional story, told with a uniquely gritty style. The story carries a message about American history and culture that still resonates today. Much like The Best Years of Our Lives this movie doesn’t hold back much. Instead, the film seeks to bring injustice and pain to light. The dialogue allows for some of the anger and bitterness of the era to come out, while retaining some of the hopes for the future. The writing also seems to capture the essence of a very powerful and unique novel. While the film does differ from the book, the message remains intact. This is an emotional and wonderful story.

The acting in this movie is wonderful. Henry Fonda earned his first Oscar nomination for Best Actor for his powerful performance as Tom Joad. Fonda’s performance seems to hold anger, frustration, and sadness just under the surface. This pent-up emotion leaves the role feeling intense and impressive. Fonda is joined by the wonderful Jane Darwell. She won an Oscar for her portrayal of Ma Joad. Her performance is wonderful, as she carries the pain and frustration of her family on her shoulders. Her acting really brings out an amazing strength that resonates throughout the movie.

In addition to these two stars, the film also features great acting from John Carradine, Charley Grapewin, and John Qualen. These three men help to bring the migrating family to life. Every one of the stars of this movie really embraced the emotions of being homeless and alone during the Great Depression. This is a wonderfully acted film thanks to every member of the cast. 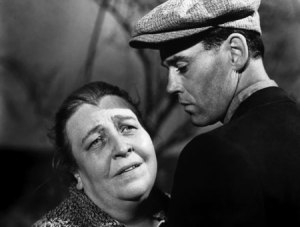 This movie has great cinematography to go along with the story. The sets, locations, costuming, and props all add to the visual success of this film. Cinematographer Gregg Toland (Citizen Kane) put his skills to work in creating the epic feel of this movie. In addition to these great aspects, the movie earned an Oscar nomination for Best Editing. In addition to the visuals, the film also features a wonderful score from nine-time Oscar winner, Alfred Newman (The King and I). The sound recording also earned the film an Oscar nomination. 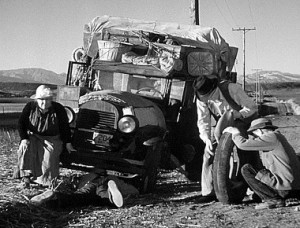 Overall, this movie succeeds in every aspect. In addition to the awards mentioned above, this one was also a Best Picture nominee. If you’re a fan of the classics, this is one you need to see. I would also recommend this one to fans of Henry Fonda or any of the other stars. This is a unique movie that really captures the struggles of a generation of Americans. If you’re a fan of the novel this might also be worth checking out. I give this one 5 out of 5 stars.