Based on the novel The Ghost and Mrs. Muir by Josephine Leslie

When Mrs. Muir (Tierney) is widowed, she takes her daughter (Wood) and heads for a new life on the seaside. When they rent Gull Cottage, Mrs. Muir is soon greeted by the ghost of Captain Gregg, the former owner. As Mrs. Muir and Captain Gregg butt heads, they begin to form a unique relationship. 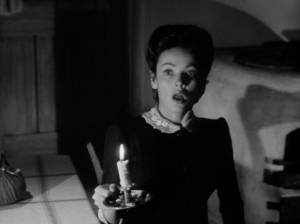 This unique story came from the novel The Ghost and Mrs. Muir, published under the pseudonym R.A. Dick. (The true name of the author was Josephine Leslie.) The novel was adapted by Philip Dunne (How Green Was My Valley), and the film was directed by Joseph L. Mankiewicz (Cleopatra). The cast of the film includes Gene Tierney (Leave Her to Heaven), Rex Harrison (My Fair Lady), and George Sanders (Rebecca). It also features Edna Best (The Man Who Knew Too Much (1934)) and Natalie Wood (West Side Story).

This story is a unique mix of romance and fantasy, written by Josephine Leslie. She wrote a number of novels under the name R.A. Dick. This story was adapted from her novel by the award-winning screen writer, Philip Dunne. He did a great job bringing the story to life. The tone of the film is set up quickly, and allows the unique nature of the story to stand out. The dialogue is witty and even humorous at times. The romance is built into the foundation of the film, allowing it to be a constant presence. Overall, this is an entertaining story that stands up pretty well, despite being close to seventy years old.

The acting in this movie is really good. I’m a big fan of Gene Tierney, an actress that I think is pretty underrated in comparison to the actresses of her era. This film is another example of her ability to fit herself into a role and bring out the essence of the story. She’s paired up nicely with Rex Harrison and George Sanders. Each of these men does a great job with their parts in this one. Edna Best also does great work in her role in this movie. The film also features a good early performance from Natalie Wood. Overall, the cast does a good job with this one.

Visually, this movie is very beautiful. The use of light and shadow really add something to the tone of the film. The movie earned an Academy Award nomination for Best Cinematography. The camera work done by Charles Lang (Sabrina (1954)) is wonderful. In addition, the film set design and costume work is also great. Add in a good score, and this is a pretty good movie.

This is a classic fantasy romance that holds up pretty nicely. If you’re a fan of any of the actors in this one, make sure to check it out. I would also suggest this to fans of unique romance. I give this one 3.5 out of 5 stars.