Bob Wallace (Crosby) and Phil Davis (Kaye) are old army buddies who’ve found success with a stage show. When their former commanding officer (Jagger) runs into financial trouble, two go to Vermont to help him out. Along the way they pick up Betty (Clooney) and Judy (Ellen), sisters looking for a break into show business. Now they’re hoping that a white Christmas might help to save the day. 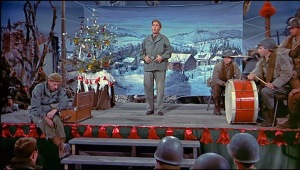 The story for this movie is great. The mix of music throughout the film makes it a great addition to the list of classic musicals. Krasna, Panama, and Frank did a great job weaving the post-war era into the film as well. The dialogue is witty, letting Crosby and Kaye create wonderful moments throughout the film. The movie also allows for the right level of sentimentality for a Christmas-themed musical. Despite some of the dated references, this one holds up wonderfully.

The acting, dancing, and singing are all combined nicely in this one. Crosby and Kaye lead the way with incredible performances. Crosby also brings Irving Berlin’s classic song White Christmas to life with his wonderful voice. Kaye holds his own with Crosby, delivering a great performance. Together they have a wonderful chemistry. Rosemary Clooney and Vera Ellen are also good in this one. These four all sing, dance, and act their way through this movie with great skill. The added performances of Jagger and Wickes just make this even better. Overall, the cast shows off their talent in this classic musical. 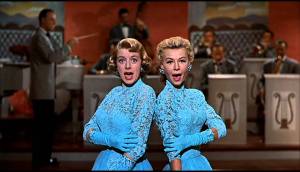 The sights and sounds in this one are awesome. Visually, this movie uses color to accentuate the wonderful musical numbers throughout the movie. The camera work, costuming, and choreography go a long way in creating memorable moments throughout the film. The music, by Irving Berlin, is perfect for the film and remains entertaining even today. In one interesting twist, this film was nominated for one Oscar, for Best Original Song. While White Christmas might be the song we recall from this, the nomination was for Count Your Blessings Instead of Sheep. 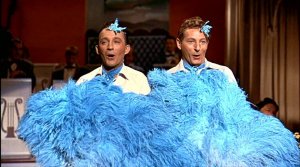 This movie featured a couple of firsts. This film marked the very first time that audiences experienced Paramount Pictures VistaVision. The widescreen format used a double sized negative to increase the sharpness of the prints. This process was used for just seven years, but it laid the groundwork for companies like IMAX. The second first for this movie was the world’s introduction to the song White Christmas by Irving Berlin. The Christmas tune was an immediate hit, and is the best-selling single of all-time, with more than 50 million copies sold. 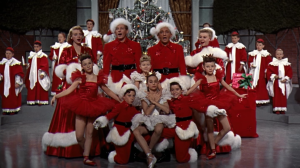 If you’ve never seen this one, you need to take the time this holiday season. This is a great choice for fans of classic musicals. I would also recommend this to fans of the stars. If you’re looking for a family Christmas film, this is one to choose. I give this one 4 out of 5 stars.