When three men break into her new home, Meg Altman (Foster) seeks refuge with her daughter (Stewart) in the home’s safe room.

The story for this film has all the elements of a great thriller. From the woman in peril, to the unknown assailants, this one puts all the right things together. The premise works, and nothing seems to be outside of realistic. The minimal use of dialogue really lets the action tell the story. The story also has enough little twists to keep from being predictable. If there is any weakness to the film, it’s the feeling that the story takes the easy way out in several instances of decision. While this isn’t terrible, it does weaken the story somewhat. Overall, this is a solid story that pays off nicely. 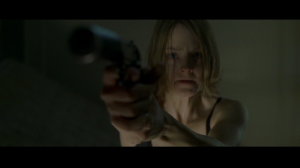 The acting in this movie is actually really good. Foster does a good job bringing out a range of emotions in her performance. She also allows her character to be vulnerable enough to keep the tension building in the movie. Kristen Stewart also does a good job in one of her earlier roles. Whitaker, Leto, and Yoakam also do nice work. These three men carry a lot of the tension of the movie with the conflict between them. Overall, the acting in this movie is good, but nothing special. One interesting note is that Nicole Kidman was set to star in the movie originally. She was forced off the project due to an injury she’d received while filming Moulin Rouge!.

The visuals in this movie are pretty awesome. The unique camera work, CGI work, and editing bring together the feel of this film. The use of a limited color palette makes this feel a lot like a Hitchcock film. The movie also uses some great set design and special effects in bringing this one to life. Due to the increasing damage to the home as the story progresses, much of the movie was filmed in chronological order. All of these decisions combined to make this a visually impressive film. The movie also features a nice score written by Howard Shore (Hugo).

This is a high-tension thriller that works pretty nicely. If you’re a fan of thrillers, this is one to check out. I would also recommend this to fans of any of the stars. This film doesn’t let up once it gets going, so be prepared for the intensity. I give this one 3.5 out of 5 stars.