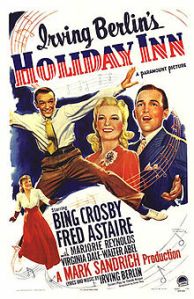 Based on ideas by Irving Berlin

Starring: Bing Crosby, Fred Astaire, Marjorie Reynolds, Virginia Dale, Walter AbelSinger Jim Hardy (Crosby) and dancer Ted Hanover (Astaire) are vying for the affection of Linda Mason (Reynolds). This young talented woman isn’t the first that the two men have tangled over. Soon Linda is torn between the men and the lives they have to offer her.

This is a fun Christmas movie directed by Mark Sandrich (Top Hat). The story is based on Irving Berlin’s (This is the Army) ideas, and was written by Claude Binyon (North to Alaska) and Elmer Rice (Street Scene). The film features the wonderful Fred Astaire (Funny Face) and Bing Crosby (Going My Way) in the leading roles. The cast also includes Marjorie Reynolds (Ministry of Fear), Virginia Dale (All Women Have Secrets), and Walter Abel (Mr. Skeffington).

The story for this movie is a fun example of Hollywood’s musicals of the time. The writing does a good job finding the best moments for Astaire and Crosby to showcase their many talents. The dialogue is fun, but entirely what you’d expect from a Hollywood musical. Unfortunately, this film is another example of the racism of Hollywood in this era. The movie features an entire musical number done in black face. This is an isolated moment in the movie that doesn’t add anything in terms of moving the story forward. In many televised versions of this movie, this scene is edited out. (It doesn’t really matter to the story.) Overall, the story works along with great music that’s still enjoyable today. Overall, this is a good story that works nicely.

The acting in this movie is good. I don’t think that anyone give a particularly great performance though. The real highlights of the movie are the singing and dancing. Bing Crosby and Fred Astaire are two of the great talents of their time. This movie finds every way to remind you of that. In one of many great moments, Bing Crosby sings the Oscar-winning song White Christmas in this one. This would be the only Oscar won by the film. For Fred Astaire, the dance numbers are many. He was a master of his craft and every step is wonderful. Marjorie Reynolds and Virginia Dale are also good in this one. These two women do a good job showing off their talents as well. Walter Abel is also good in this one. Overall, the cast does a nice job with this movie.

This movie features some great music and great dancing. The set designs and costuming all come together to make this a fun movie to watch. I would definitely suggest this one to fans of classic musicals. I would also recommend this to fans of the stars in this one. While the black face number might be an issue depending on the version you see, this is still a good movie without it. I give this one 3.8 out of 5 stars.Rating: PassedRunning Time: 100 Minutes