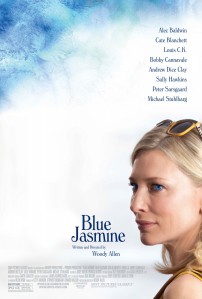 Written and directed by Woody Allen

Jasmine (Blanchett) is still reeling from the collapse of her life as a New York socialite. When she arrives at her sister Ginger’s (Hawkins) doorstep, she’s in denial about her new situation. Now she’s trying to rebuild her life while avoiding the painful realities of her past.

This film is another one of the creations of the auteur, Woody Allen (Midnight in Paris). He wrote and directed this film, which earned a nomination for Best Original Screenplay. The cast, like most Woody Allen films, is full of big names. Cate Blanchett (The Talented Mr. Ripley), Alec Baldwin (The Departed), and Sally Hawkins (Godzilla) are just several of the cast members. The film also features Andrew Dice Clay (Pretty in Pink), Bobby Cannavale (The Other Guys), Louis C.K. (American Hustle), and Peter Sarsgaard (An Education). 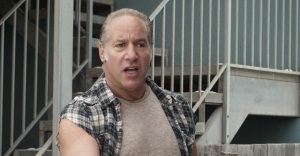 Woody Allen crafted an interesting story for this movie. The film seems to look deep into the personal anguish that comes from starting over. In addition, the movie takes a look at the failures that accompany that process. From narcissism, to rage, to self-medicating, the movie seems to acknowledge and understand it all. The dialogue is built with Allen’s well-known wit, but it finds the right times to be biting and cold. Allen did a good job keeping the twists coming. The non-linear nature of the film also helps to keep the questions from being answered too early. The payoff seals the deal on this wonderful movie. It’s definitely deserving of the Oscar nomination.

The acting in this movie begins and ends with the powerful performance given by Cate Blanchett. Her performance feels just right for a woman on the edge of sanity. She brings out the extreme emotions of her character perfectly. She also finds great ways to portray the dependent nature of her character. For her great work she earned her second Oscar for Best Actress. She’s not the only one who does a great job in this film. Her co-star, Sally Hawkins, is also great. She’s got a fun role that seems to play off of the insecurities of Blanchett’s character. Hawkins holds her own in this one, and it’s a great performance. She earned her first Oscar nomination, for Best Supporting Actress, for this movie. 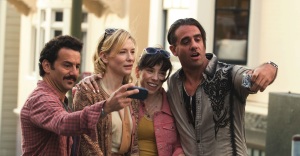 The men in this movie also do some nice work. Alec Baldwin, Andrew Dice Clay, Louis C.K., and Peter Sarsgaard all do a good job with their parts in this movie. The standout performance from the men came from Bobby Cannavale. He has a great role that seems to run all over the emotional spectrum. This is definitely one of the best performances of his career. Overall, the cast does a great job with Woody Allen’s wonderful script.

This movie was filmed in New York and San Francisco, and takes full advantage of the unique aspects of those cities. The costuming and set design also do a nice job depicting lives on opposite sides of the financial world. The movie uses some great music to underscore the story as well. Otherwise, this movie is much like my other Allen favorites. There seems to be little effort to make the world around the characters anything but ordinary. This allows the people to be the focus. This further allows the audience to relate to the characters. Perhaps the visual strength of the film was knowing how to retain a normal world for the story to live in.

If you’re a fan of Wood Allen, this is another one to check out. I would also suggest this one to fans of any of the stars. Blanchett’s performance is reason alone to watch this movie. I think the story is a dark comedy, with an emphasis on the dark. It’s a tough watch at times, but it’s just so great to watch. I give this one 5 out of 5 stars.