Based on the writings of Stefan Zweig

After his aging benefactor (Swinton) is murdered, Gustave H (Fiennes) and his Lobby Boy, Zero (Revolori) embark on a series of adventures. Their adventures are centered on a massive inheritance, a priceless painting, and the upheaval of war.

The strange vision of Wes Anderson (Fantastic Mr. Fox) came together in this film that he wrote and directed. The story is based on the writings of Stefan Zweig (Letter from an Unknown Woman), an Austrian novelist, playwright, and journalist who died in 1942. The story was created by Anderson with Hugo Guinness (The Royal Tenenbaums).

Like everything that Wes Anderson does, this is a strange and exotic adventure filled with twists and turns. The writing does an excellent job telling the story with unique narrative told over the visuals. Like most of his movies, the story makes the most of the unexpected and the inappropriate. This makes for a fun and unique story that just has fun. It’s the kind of movie that doesn’t take itself too seriously on the surface, but actually tells a great tale. My favorite aspect of this one is the dialogue. Nothing seems improvised, and every word adds to the feel of the movie. This includes the action, which feels deliberate and scripted throughout. Thankfully this doesn’t make the movie feel tightly wound. On the contrary, the story has plenty of room to allow the actors to bring out the great aspects of their characters. 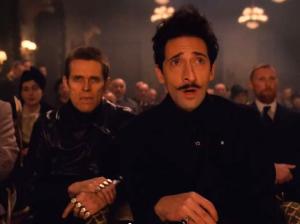 As I mentioned above, the story is a great basis for the actors to work with. Every single character seems to have their own unique design. I’m sure that this comes from both Anderson and the actors playing the parts. As the center figures of the film, Fiennes and Revolori are wonderful. Not only do they both do a great job with their roles, but they also have great chemistry with one another. Their unique relationship really provides a great basis for the film. The fun doesn’t stop there. Adrien Brody, Willem Dafoe, and Edward Norton all have really great roles in this one. The unique nature of their characters all come out in wonderful scenes throughout the film.

With so many great actors, it’s hard to imagine all of them standing out so much. Thankfully the writing provides opportunities for everyone to have their moment in this one. Tom Wilkinson, Tilda Swinton, Jeff Goldblum, Léa Seydoux, Jason Schwartzman, Saoirse Ronan, Owen Wilson, Jude Law, and F. Murray Abraham all add something special to this one. If I seem like I’m skimming over the many stars (which I am), it’s because there are so many great moments that mentioning them all would ruin the movie. Just keep in mind that Anderson knows how to use talent to make his films better. This is no exception. 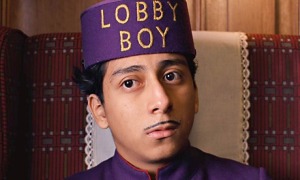 The movie is a visual masterpiece. The success begins the wonderful use of color, set design, and costuming. The camera work is equally great. Cinematographer Robert Yeoman (Rushmore) does a wonderful job finding the right way to capture the story. In addition, the film uses differing aspect ratios to set apart the concurrent eras being portrayed. I thought this might become distracting, but it’s actually very nicely done. Composer Alexandre Desplat (The Imitation Game) adds his unique sound to this one with a wonderful score. Overall, the movie is executed wonderfully from every aspect. 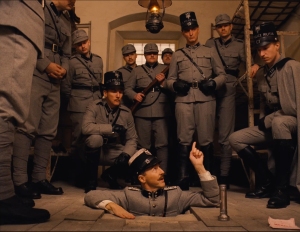 If you’re a fan of Wes Anderson and you haven’t seen this movie, how dare you!? I would definitely recommend this to fans of his, or any of the stars in the movie. I would also suggest this to fans of unique comedies. The movie is visually unique, wonderfully written, and well-acted. I give this one 4.9 out of 5 stars.