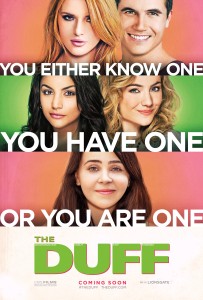 Based on the novel “The Duff” by Kody Keplinger

Screenplay by Josh A. Cagan

Bianca (Whitman) thought she knew her place in the social order of high school. When she finds out that she’s been labeled a duff, she begins to take action to change things.

This comedy comes from the novel “The Duff”, which was written by Kody Keplinger. Josh A. Cagan (Bandslam) wrote the screenplay, and the film was directed by Ari Sandel (West Bank Story (short film)). The film features Mae Whitman (Scott Pilgrim vs. the World) and Allison Janney (The Help). The cast also includes Bella Thorne (Blended), Robbie Amell (Max), and Nick Eversman (Wild).

This is a comedy that’s built into the hyper-social electronically based world of the current high school class. The success of the film comes from the acknowledgement of social media on their lives. The writing has some fun moments and finds humor in all of the little interactions between the main characters. The movie also does a good job not taking itself too seriously. This is a pretty predictable movie, but that should be expected from a comedy like this one. Despite the predictable plot, there are enough little twists and a lot of comedy to keep it interesting. This will definitely date itself quickly due to all of the social media references, but it’s a fun one. 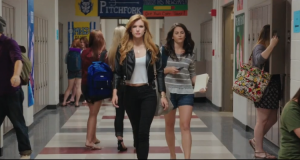 The acting in this movie doesn’t do much to wow. Whitman, Janney, and Amell all do a good job in this one. I’m glad to see Mae Whitman lead the way after a number of great television roles. She does a great job with the comedy and the more dramatic moments of the film. Janney’s performance reminds me of her work on Juno. She seems to understand the style of comedy in the film and she plays off of it nicely. Amell also does a good job, and has great chemistry with Whitman. While the rest of the cast is good, they don’t seem to bring anything special to the film. 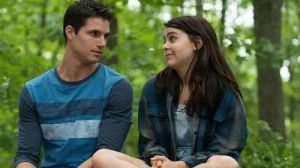 This movie is a highly stylized one, with a number of unique visuals that you won’t see in too many films. While the story doesn’t do anything special, it’s still entertaining. While it’s not the next Sixteen Candles, this does enough to recommend to comedy viewers out there. Fans of movies like Clueless might also enjoy this strange look into the lives of high school students. I would also suggest this to fans of Whitman, who gives an excellent performance. I give this one 3.1 out of 5 stars.