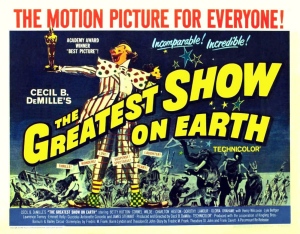 In 1948 David O. Selznick decided that he would make a film centered around a circus. Although he was passionate about the project, he was unable to get the necessary funding. After he abandoned the project, Cecil B. DeMille (The Ten Commandments) picked up the idea and ran with it. The following year he formed a partnership with John Ringling North to make the film a reality. The partnership allowed him insight and access into the world of circus life. The screenplay, written by Fredric M. Frank (El Cid), Barré Lyndon (To Please a Lady), and Theodore St. John (Reap the Wild Wind) took more than a year to complete. 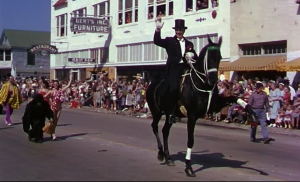 For Jimmy Stewart this was an interesting chance to go after a role. His recent failure at the box office with No Highway in the Sky pushed him to look for an opportunity to get his career back on track. After hearing about the film, Stewart contacted DeMille and asked for the part. When DeMille indicate that it was a smaller role he got no objections from Stewart. In fact, Jimmy Stewart only asked if the role was essential to the story. When this was confirmed by DeMille the deal was done. Interestingly, Jimmy Stewart never appears in this movie without full clown makeup. Dorothy Lamour would later say, “few other big names would agree to completely hide their identity. But Jimmy felt so secure he did it willingly and had himself a great time.” 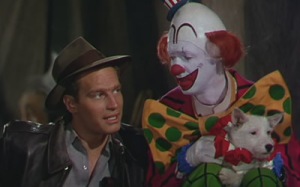 In addition to Jimmy Stewart, the cast includes Charlton Heston (Ben-Hur), Betty Hutton (Annie Get Your Gun), and Cornel Wilde (Leave Her to Heaven).

Circus boss Brad Braden (Heston) is trying to keep the show going despite pressure from the ownership. This includes managing the crew and the talent. Brad also has to face his own personal relationships and the past lives of those he works with come back. One of those people is “Buttons” the clown (Stewart). He has joined the circus as a way to run from his troubled past. While he dodges the law, Buttons tries to take care of his circus family. 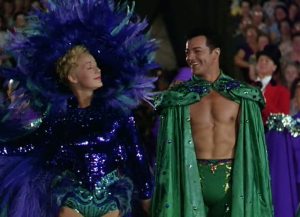 Overall, this film is not unlike most of DeMille’s more popular works. The production is massive and the story often takes a back seat to the visuals. This time DeMille had the opportunity to capture the real circus atmosphere thanks to his partnership with John Ringling North. Some of the film feels more like a documentary as the footage shifts to the mechanics behind making a circus operation succeed. Done with narration, these moments unfortunately slow the movie down unnecessarily. Today this story unfortunately feels campy and seems to overreach. Time magazine put it nicely when it said that the movie “fills the screen with pageants and parades… [but] does not quite hold all this pageantry together.” 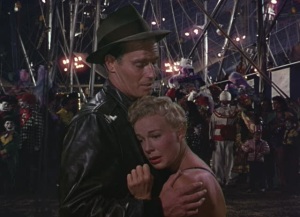 Jimmy Stewart does a good job with his role in this film. His performance really anchors the best dramatic arc of the film. His character, Buttons, was written in a way that connects him with many aspects of the story. He almost becomes the voice of reason for the other stars. He also had great chemistry with Heston and the rest of the main cast members. Charlton Heston also did good work in this film. He has the natural confidence to make his part as the boss believable. He also works well with the other stars to bring out the right tone for their different relationships. Betty Hutton and Cornel Wilde also do good work, but their parts often feel over-acted. Some of this might be due to the writing, which pushed some aspects of the story a bit too far.

This was an interesting choice of roles for Stewart, who was still commanding big salaries for leading roles. While the critics hammered this film, it still managed to win Best Picture and Best Story at the Oscars. 1952 ended up being a productive year for Stewart. After this film, Jimmy Stewart went on to work on Bend of the River and Carbine Williams, which were both released in 1952. Bend of the River was a continuation of his great working relationship with director Anthony Mann (Winchester ’73).

While this film saw incredible success at the time, it has long been considered one of the worst Best Picture winners of all-time. Today the movie doesn’t hold up well, and should be watched only for the nice performances by the small group of actors mentioned above.