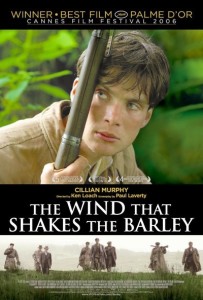 Two brothers (Murphy, Delaney) find themselves pulled into the conflict between their own people and the British forces occupying Ireland. The brutality of the guerrilla warfare soon begins to take a toll on the brothers and the many others fighting alongside them. 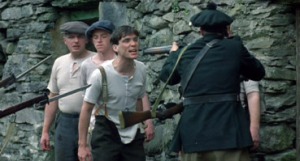 It needs to be pointed out that Ken Loach doesn’t dance around the subject matter in his films. His movies tend to take a head first approach that often includes some tough and even graphic moments. This film features the kind of story that works nicely with that approach. The history behind the story is the very real struggle of the Irish people who fought against the English in the three-year long Irish War of Independence. The writing does a good job establishing the climate of frustration amongst the characters without taking a lot of time to do so. This leaves the bulk of the film for the interesting twists and turns of the struggle. The personal struggles of the characters aren’t ignored for the bigger picture. These more personal moments really pay off wonderfully. Overall, this is a story about relationships and how they are affected by the struggles of war. It’s a powerful and very gritty film. 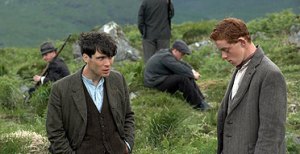 The acting in this movie picks up on the emotions of the story very well. Cillian Murphy was a great choice for the lead in this one. He has a somewhat reserved approach that he breaks at just the right times. This creates a roller coaster of emotion that really enhances the film. He also has really nice chemistry with Padriac Delaney. The two play off of one another, creating a feeling of family and brotherly tension. Like the story, their performances balance the bigger picture and the more personal feelings wonderfully. Liam Cunningham and Orla Fitzgerald are just a few more of the cast members who do great work in this one. The actors were all asked to work with some deeply emotional material and their success is evident. 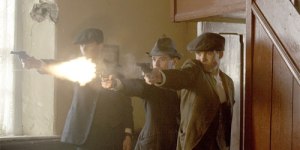 The contrast between the good and the bad in the story is played out visually as the violence plays out in the beautiful countryside of Ireland. The cinematography by Barry Ackroyd (The Hurt Locker) really finds the beauty in the setting. Ackroyd also knew when to get close to the violence and grittiness of the film. Like the story, this balance works wonderfully. The film also features a beautiful score by George Fenton (Gandhi), which accents the visuals nicely. 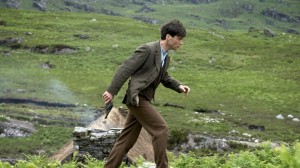 This is a tough watch due to the pain and violence shown throughout. If you’re a fan of historical dramas or war films, this is one for you. I would also suggest this one to fans of movies like Braveheart. Fans of Cillian Murphy or the other members of the cast will also enjoy this one. I give this one 4.4 out of 5 stars.