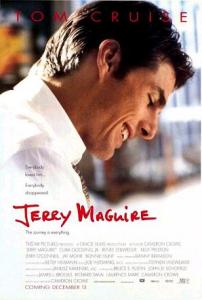 Written and directed by Cameron Crowe

After a unique moment of clarity, agent Jerry Maguire (Cruise) has a change of heart that costs him his job and his fiancée (Preston). Now he’s hoping that he can succeed with a new set of rules, a loyal assistant (Zellweger), and his one remaining client (Gooding Jr.). 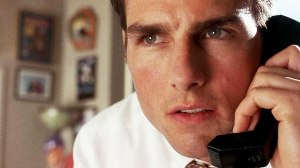 This film is one of the many unique creations from writer and director, Cameron Crowe (Say Anything). The film is loosely based on legendary sports agent, Leigh Steinberg. This 1996 box office hit earned five Oscar nominations and a ton of critical praise. The movie stars Tom Cruise (Rain Man), Cuba Gooding Jr. (As Good as It Gets), Renée Zellweger (Chicago), and Kelly Preston (For Love of the Game). 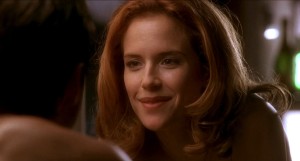 This story uses the strange world of sports management as the backdrop for a romantic drama. Crowe does a nice job building this unique setting in a way that introduces the characters nicely. The story also does a good job exposing the built-in contradictions of the business. The dialogue for this movie does some really fun things. The comedic elements of the movie almost make this a romantic comedy, but it doesn’t rely on comedy to push the story forward. The way that the character of Rod Tidwell is written really adds something special to the film. Cuba Gooding Jr.’s performance surely had a lot to do with that, but the writing gave him some awesome material. This movie also features some great payoff lines towards the end of the movie. This might be the best writing of Crowe’s screenwriting career, and it’s a fun one. 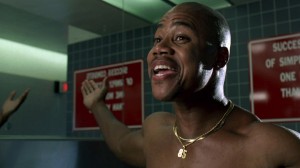 Tom Cruise was the perfect choice to play the title character in this film. His performance has that familiar Cruise energy, but also has a deep emotional side that really plays nicely with the story. He’s got a couple of excellent actors to work with in this one. Renée Zellweger and Tom Cruise are an interesting pairing that didn’t immediately make sense to me. Luckily I was wrong. The chemistry between the two is wonderful. Zellweger does a good job with her role in general. She plays things strong enough to avoid being overshadowed by Cruise and Cuba Gooding Jr.. 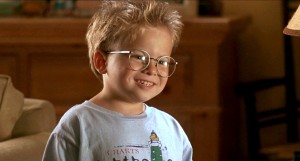 Cuba Gooding Jr. also has good chemistry with Tom Cruise. The two seem to bring out the energy within one another, and the writing helps to give them many opportunities to do so. Cuba Gooding Jr. brings this movie something special. He does all the right things with the emotional aspects of his role, but also has a natural bravado that plays perfectly. His performance was good enough to earn him an Oscar win for Best Supporting Actor. Finally, Kelly Preston does a good job being somewhat of an antagonist in this one. She’s got a smaller role that shows up just when it’s needed throughout the story. Overall, this movie features a wonderful cast that does all the right stuff with the story. (It’s also important to note that this movie features one of the best child-actor performances from Jonathan Lipnicki.) 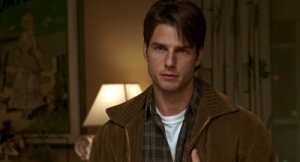 It’s hard to say if this is a romantic drama, a romantic comedy, or something of a mix between the two. I don’t know if it matters too much. The film is nicely made, and tells a great story. The movie earned Academy Award nominations for Best Picture, Best Actor (Cruise), Best Film Editing, and Best Original Screenplay. The language is a bit strong, mainly used to emphasize the drama within the story. Otherwise, this is a good one for fans of any of the actors. I would also suggest this one to fans of drama or romance. I give this one 4 out of 5 stars.