Hoke Colburn (Freeman) has been hired by Boolie Werthan (Aykroyd) to drive for his mother (Tandy). Over time, the stubborn Miss Daisy and Hoke begin to build a unique relationship.

This movie was nominated for nine Academy Awards, winning four, including Best Picture. The script was written by Alfred Uhry (Mystic Pizza), the same writer who penned the stage play this film is based on. The film was directed by Bruce Beresford (Tender Mercies). The film stars Morgan Freeman (Million Dollar Baby), Jessica Tandy (The Birds), and Dan Aykroyd (Ghostbusters).

This story was first written for the stage by Alfred Uhry in 1987. Two years later Uhry adapted the play for the big screen. This story is a mix of drama and comedy that’s built into a unique segment of American history. The comedy comes from the awkward nature of the relationship between Hoke and Daisy. The drama comes from within that same relationship. This mix of comedy and drama bring something heartwarming out the story. The dialogue also adapts over the course of the story, helping to show the changes within the main characters. This story isn’t without controversy. Some critics have argued that this film romanticized the South during the struggle for Civil Rights. Some of the dialogue also seems to border on stereotyping the black characters in the film. While I can see the issues that some people have with this one, I don’t think it’s a discriminatory film. The story doesn’t glorify racism or the lack of equality. It simply builds a story within that setting that goes outside the expected plot lines. Overall, this is a nicely written story. 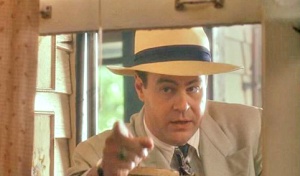 The acting in this movie does everything right. Jessica Tandy would win an Oscar for Best Actress for her work in the film. Additionally, Freeman (Best Actor) and Aykroyd (Best Supporting Actor) were nominated for their roles in the movie. This trio of stars does a great job bringing the story to life. The chemistry between Freeman and Tandy is really great in this movie. The two seem to ease into the relationship between their characters, making it far more realistic. Dan Aykroyd also does a nice job adjusting his performance to reflect the passage of time in the story. Overall, the acting does a good job avoiding playing the roles within stereotypes. In many ways this movie does a lot of good work breaking those stereotypes. 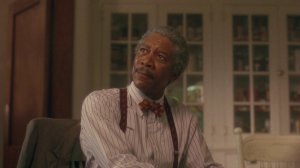 This film works from a production standpoint as well. The film was awarded an Oscar for Best Makeup thanks to the nice transformation of the stars. The story spans many years and the makeup work does a good job aging the actors. The movie also earned Oscar nominations for Best Set Decoration, Best Costume Design, and Best Film Editing. Another nice touch in the movie is Hans Zimmer’s score. The music is light and flows nicely within the movie. It helps to keep the tone of the story up throughout the film. The production aspects of this one do a nice job making it a memorable movie that still works today.

This is a good movie that does a lot of things right. I think some people might have their issues with the story if they’re looking to read something into the script. Otherwise this might be a good one for fans of the stars. I would also suggest this one to anyone who likes light drama or comedy. I give this one 4 out of 5 stars.