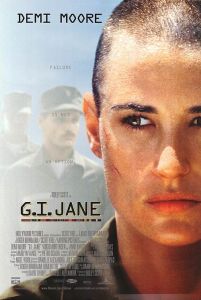 This unique military-based drama was written by Danielle Alexandra and David Twohy (The Fugitive). Oscar nominated Ridley Scott (Blade Runner) took on the project as director. The film stars Demi Moore (Ghost), Viggo Mortensen (The Lord of the Rings: The Return of the King), and Anne Bancroft (The Elephant Man).

It’s always dangerous to make a film about an issue like sexism in the military. There are a number of ways that the writing can go wrong. This one has some fun moments but undermines its own story through a series of bad choices in the third act. Instead of depicting a woman who’s earning her opportunities, the film seems to work through a series of backdoor deals and loopholes. This weakens every aspect of the film and leaves the actors with a handful of powerful moments in a film that doesn’t quite come together. The dialogue in the film is also pretty weak. Most of the time it’s a mix of overstated rhetoric and really awkward clichés. Unfortunately the premise of this story is undercut by the weak execution.

The acting is exactly what you’d expect from such a weak story. While Mortensen and Bancroft have small strong moments, they’re unable to elevate the material in any significant ways. Demi Moore doesn’t seem to bring anything to this film. The physical displays of bravado are ridiculous and she doesn’t deliver any of the dialogue without an obvious effort to sound tougher than she is. Her role feels more like a child trying to be an adult than a woman trying to make it in a male dominated environment. Like the story, her performance really does a disservice to the point the writing was trying to make.

There’s nothing wrong with the production work on this film. It does all the things you’d expect from a movie like this. Unfortunately the work doesn’t do anything new or exciting. The film comes together as flat and uninspiring due to a combination of the aspects mentioned above. This isn’t a movie I can recommend to anyone. I give this one 1.5 out of 5 stars.