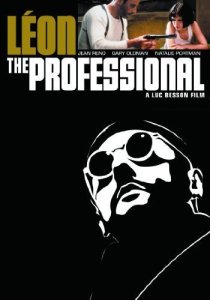 Written and directed by Luc Besson

Léon is a solitary man and a cold-blooded killer. He works for mafia out the underworld of New York City. When he saves the young Mathilda (Portman) from rogue D.E.A. agents, Léon finds himself unexpectedly connected to the girl.

How do you twist a French action-thriller into something unique? You make the dialogue in English and set it in Little Italy in New York City. Luc Besson (3 Days to Kill) wrote and directed this film, using a similar theme to his work La Femme Nikita. This movie features Jean Reno (Mission: Impossible) and Gary Oldman (The Dark Knight Rises). Natalie Portman (Thor) made her feature film debut in this one as well.

Taking an action-thriller and giving it a heart is a rare and interesting accomplishment. Luc Besson found the right formula when he wrote this story. The mysterious Léon is introduced through a series of moments that highlight his solitary nature and his brutal efficiency. The dialogue is limited early in the film, which allows the visuals to tell a wonderful story. On the other side, Mathilda is also nicely written. Mathilda is wise beyond her years and very complex despite her age. The story connects the two with great sequences, and then allows the relationship to grow. This story pays off with action as well as solid dialogue and a great level of emotion.

The acting in this movie features some incredible performances from the three stars listed above. Natalie Portman launched her feature film career with this movie. Her performance brings out the emotion of the story in so many great ways. She was also able to find the right way to play some of the more gritty moments for her character. Her connection with Jean Reno is also really evident throughout the movie. Reno also does an incredible job in this movie. Much like other assassin films, Reno’s character is a man of few words who knows how to handle business. Together, these two are an oddly good pairing that really bring the story a lot of heart.

On the other side of the action is a great performance from Gary Oldman. He brings out all the quirks and flaws in his character with a unique twist. The performance makes the character devious and cold-blooded from the very beginning. He also delivers some of the best dialogue in the film. His performance might be the most polarizing of the roles in the film. It works wonderfully, but it has been an issue for some critics due to his highly stylized performance. Overall, the cast does incredible work in this movie.

The visual components of this film come together in perfect harmony with the tone of the screenplay. The sets, locations, and costuming all lend themselves to the neo-noir vibe of the film. The action sequences are shot with an over-the-top stylization that fits perfectly with the style of the movie. The graphic violence is nicely balanced with the built-in innocence of Portman’s performance in the film. The action sequences in this film create a strange claustrophobia similar to the violent moments of A Prophet. Much of the credit should go to cinematographer Thierry Arbogast (The Fifth Element) and editor Sylvie Landra (The Messenger: The Story of Joan of Arc). The score by Eric Serra (GoldenEye) also adds something nice to the film. All of these aspects come together in a wonderful movie that doesn’t seem to have any major weaknesses.

If you’re a fan of action films with a deeper story, this is one for you. I would also suggest this to fans of filmmakers like Quentin Tarantino since it pushes the story with a similar intensity. I would also recommend this to fans of the three stars. This is an intense experience told from a unique point of view. I give this one 5 out of 5 stars.