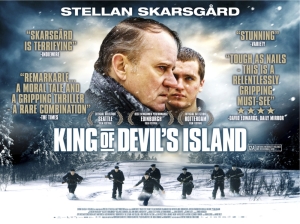 At the Bastøy Boys Home a brutal leadership has victimized many of the young inmates. After a series of escalating events the boys revolt, hoping to overcome the cruelty of life on the island.

This 2010 film is based on true-life events that took place in Bastøy, Norway in 1915. The story was developed by Mette M. Bølstad (Happy, Happy) and Lars Saabye Christensen (Cross My Heart and Hope to Die). The screenplay was written by Dennis Magnusson (Lords of Chaos) and Eric Schmid (American Son). Marius Holst (Mirush) directed the film. The cast features the talented Stellan Skarsgård (Thor) alongside Benjamin Helstad (Permafrost), Trond Nilssen (Sons of Norway), and Kristoffer Joner (The Monitor).

This is a gritty and emotional story rooted in the dark history of Norway’s Bastøy Boys Home. The dramatized aspects of the story are blended with the true history behind the era. The characters created for the film are each designed to be intense and emotionally troubled. The protagonists and antagonists are both so polarizing that it’s impossible to find a real hero in the film. The dialogue does a nice job bringing out the true nature of the place and the people. The writing also keeps firmly focused on the gritty details with few moments of redemption or pleasure. These aspects come together in a film that is solid in story. The success of the story might not be enough for everyone since it is a dark story that doesn’t seek out any redemption from the premise.

The acting in this one is really great. The cast seems to latch on to the dark emotional struggle of their roles. Stellan Skarsgård does an excellent job as one of the antagonists in the story. He has a cold disconnect that plays nicely with the writing, and also gives the other cast members something to work off of. Kristoffer Joner is another great addition to this one. Like Skarsgård, Joner does a great job bringing out the darkness of the story. His role is full of emotional twists and turns that he was able to navigate brilliantly.

Trond Nilssen and Benjamin Helstad are also great in this one. These two led the way for the protagonists in the story with excellent performances. They have a great connection that plays well on screen, and they have good chemistry with the rest of the actors. The core of this cast really came together with solid work that brings the era and the setting to life. The supporting acting isn’t as strong, but it does enough to make this one work.

The visuals in this film accentuate the absence of color in the world of the story. This almost monotone presentation keeps the film feeling cold and desolate, much like the setting. The costuming and set design add to the harsh nature of the setting and really help complete the picture being painted. The score and the rest of the production add to this one, making it a pretty solid film overall.

This is a rough film that focuses on an uncomfortable set of circumstances in an unforgiving setting. While the production does all the right things, this is still a very dark film. If you’re looking for justice or resolution from a film you might look elsewhere. I would suggest this one to fans of the stars, or films like The Wind that Shakes the Barley. I give this one 4.4 out of 5 stars.