Based on characters created by Michael Crichton

Twenty-two years after the disastrous events in Jurassic Park, a new park has been built in its place. Now the operators have taken a series of risks in an effort to breath new life into the park.

This film serves as the fourth in the Jurassic Park series, coming fourteen years after Jurassic Park III. The story is based loosely on the characters and events originally outlined by Michael Crichton (Congo). The screenplay was written by Rick Jaffa (Rise of the Planet of the Apes), Amanda Silver (The Hand That Rocks the Cradle), Derek Connolly (Safety Not Guaranteed), and Colin Trevorrow (Making Revolution). Colin Trevorrow also directed the film. The cast includes Chris Pratt (Guardians of the Galaxy), Bryce Dallas Howard (The Help), Vincent D’Onofrio (The Judge), and B.D. Wong (Father of the Bride). Irrfan Khan (Slumdog Millionaire), Nick Robinson (The Kings of Summer), and Ty Simpkins (Iron Man 3) are also featured.

Like many reboots and sequels, this film had the challenge of living up to the films that came before it. For this movie it was all about living up to the success of the first film, Jurassic Park. The writers understood that and crafted a screenplay that frequently pays tribute to the original film. This isn’t a remake though. The movie might honor the original, but it also brings new layers and twists to the premise. The characters developed for this one range from great to somewhat useless.

The writers attempt to add some emotional depth to the story fall flat. This is fortunately a very minor arc in the film and it’s easily overlooked. There are also some unexplained character issues that unfortunately don’t pay off like they should. The success of the film comes from a handful of really fun characters and a ton of action. The film gets off to a slower start, but barrels through the finish line with a ton of great action sequences. This one has some issues, but it does a number of great things.

The acting in this movie works with the material nicely. Chris Pratt leads the way with a great role that brings a good level of adventure to the film. He also does good work alongside the rest of the cast. This includes decent chemistry between himself and Bryce Dallas Howard. Howard has her own good moments in this one. Even her action sequences seem to work out nicely. Another one of the really good performances in this one is from Vincent D’Onofrio. His role really helps to give the story some depth. Throughout the film he helps to accentuate the tension in the story. 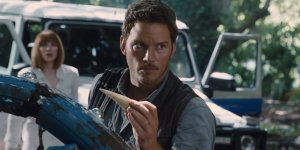 The film also features nice performances from B.D. Wong, Irrfan Khan, Nick Robinson, and Ty Simpkins. Each of these actors has some fun moments throughout the film. The relationship created by Robinson and Simpkins is also nicely played by them. Overall, the writing created a number of smaller character arcs that allowed these actors and a few others to shine in the film. The acting does everything the movie needed it to do, making this a solid film. 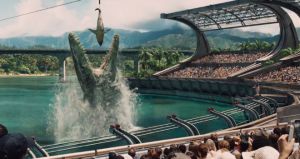 The visuals in this movie take the magic of C.G.I. and bring dinosaurs to life. The combination of models, props, computer work, and cinematography help to give life to the fantastic Jurassic World. These creations are such a major part of the story and their success was essential to the film. This also meant that the sound, set designs, art direction, and other aspects had to be in line as well. In the end the film comes together with all the aspects needed to frighten, surprise, and entertain. Woven throughout it all is a score that honors the original film and adds some new elements as well. 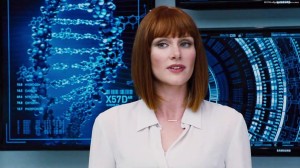 This is a perfect example of what you should expect from a summer blockbuster. While the story isn’t perfect, the other aspects of the film pay off wonderfully. If you’re a fan of any of the previous three film this is one to check out. I would also suggest this to fans of the stars. I would also encourage you to see this one even if you’re unfamiliar with the other movies in the series. While there are a number of tributes to the other movies, it isn’t propped up on those stories. I give this one 4 out of 5 stars.