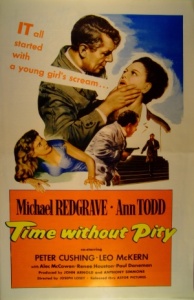 After his estranged son Alec (McCowen) is sentenced to death, writer David Graham (Redgrave) struggles to uncover the truth behind the crime. With the execution drawing nearer, David’s search for answers leads him to his son’s closest friends. 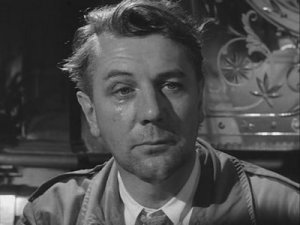 This film is a more obscure gem from 1957. Ben Barzman (Back to Bataan) wrote the screenplay and Joseph Losey (The Go-Between) directed the film. The movie stars Michael Redgrave (The Lady Vanishes), Leo McKern (A Man For All Seasons), and Paul Daneman (Zulu). The cast also features Alec McCowen (The Age of Innocence), Ann Todd (The Paradine Case), and Peter Cushing (Star Wars: Episode IV – A New Hope). 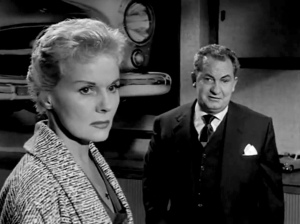 This story works within the British film noir genre. The events are shown in a unique progression that leaves more questions behind the “how” than the “what”. The initial setup is nicely done, and gives just enough information to keep it interesting. As the story unfolds, the film reveals a number of clues and characters. These revelations are all nicely written, and never seem to hint at the ending. The unpredictable nature of the conclusion is a nice aspect of this one. The dialogue is also nicely written to give the characters their own unique personalities. Those personalities give this one the depth it needed to be more than a typical British film noir experience. Overall, the story is a great blueprint for the actors and production crew to work with. 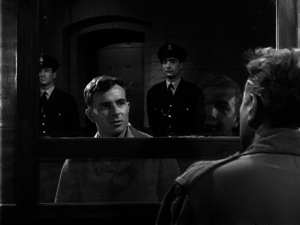 The acting in this one is really solid. Michael Redgrave leads the way with an emotionally driven performance that really holds up. He’s also able to find the right adjustments to make throughout the film. The writing calls a wide range of emotions, and he hits the mark with all of them. He was also able to find good connections with his fellow actors, bringing out the right chemistry in the film. Leo McKern’s performance is another highlight in this one. His performance is strong and complicated, and it really plays well against Redgrave’s work. Paul Daneman also does a nice job in this one. Alec McCowen, Ann Todd, and Peter Cushing all add great performances of their own to this one. Overall, this group brings out all the right aspects of the story. 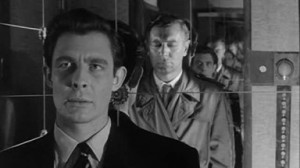 This movie looks and sounds very good, even after more than fifty years. The set design and locations all bring out the right tone to keep the story working nicely. The lighting and other aspects of the movie also come together nicely. The film also features some great camera work. Cinematographer Freddie Francis (The Elephant Man) brought out some artistic flare through a number of great shots in the movie. The movie also features a nice score by composer Tristram Cary (The Boy Who Stole a Million). 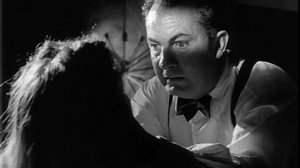 This is a nice example of the British film noir genre from the late 1950s. The story might be a bit melodramatic at times, but the overall execution holds up nicely. If you’re a film noir fan, this is one for you. I would also suggest this one to fans of suspense or thrillers. Anyone familiar with the stars will also enjoy this one. I give this one 3.8 out of 5 stars.