Based on the comic book created by Stan Lee, Larry Lieber, Jack Kirby

Scott Lang (Rudd) is a thief with a conscience who’s looking for redemption and an opportunity to reunite with his daughter. When he’s recruited by Dr. Hank Pym (Douglas), Lang gets his chance. Now he’s learning new skills with a super suit that gives him incredible strength and the ability to shrink. With the suit, and his skills, Lang is on a mission to save the world from a dangerous villain. 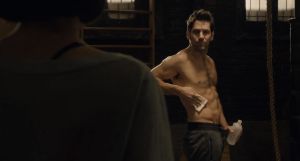 This movie is another chapter in the expanding world of Marvel films, based on the Ant-Man comic books created by Stan Lee (Iron Man 3), Larry Lieber (Thor), and Jack Kirby (Avengers: Age of Ultron). The screenplay was written by a unique team that includes Edgar Wright (The World’s End), Joe Cornish (Attack the Block), Adam McKay (Anchorman 2: The Legend Continues), and Paul Rudd. Peyton Reed (Yes Man) took on the project as director. The movie stars Paul Rudd (Knocked Up), Michael Douglas (Wall Street), Corey Stoll (Midnight in Paris), and Evangeline Lilly (The Hurt Locker). Michael Peña (Crash) and Bobby Cannavale (Blue Jasmine) are also featured in the film. 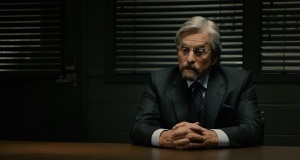 This is a fun story, based on a character created for Marvel’s comic book Tales to Astonish #27 in January of 1962. Using those characters, the film weaves a nice story around the premise. The characters fit nicely into the bigger world that the recent Marvel films have created. This one does a great job bringing comedy to the table at levels that exceed those other movies. The story is serious enough to balance out the film and keep things from getting too ridiculous. The dialogue is a mix of comedy and drama that plays well with the story as a whole. The final product is a movie that hits almost every note right on. There are some plot holes, but that’s to be expected with any film like this. Overall, the writing does a wonderful job.

Based on his career trajectory, I wouldn’t have pegged Paul Rudd to star in anything like this. Thankfully the writing met him halfway and allowed him to be funny while maintaining the skills and guts of an action star. His performance is really great, creating yet another great character for the Marvel universe. He’s also able to connect with all of the other stars in this one. Michael Douglas also does a great job in this movie. His performance really pushes the premise of the story forward in all the right ways.

These two are joined by Evangeline Lilly, Michael Peña, and Bobby Cannavale. Each of these three actors does all the right things with their role in the film. Like the other stars, these actors showed that they could handle the comedic demands of the movie as well as the more serious scenes. Corey Stoll rounds out this cast with a great performance as the menacing villain. He did a nice job not over-playing his part, which keeps the tone of the movie intact. The overall quality of the acting brings this one to a higher level.

This movie has some really great visuals. From the costume design, sets, and locations the movie looks great. The obvious visual star of this one is the CGI work. The team of artists involved with this aspect of the film did a great job. The movie also made the right choices in how the presentation should be done. Instead of a film composed of mainly CGI shots, this one used the technology in cooperation with nice practical effects and good cinematography. The visuals do all the right things in this movie, and they’re joined by good sound work as well. The film also has a good soundtrack that features a mix of great music and a score composed by Christophe Beck (Pitch Perfect). 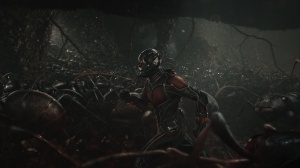 This is a solid addition to the Marvel universe that stands on its own. If you’re a fan of comic book movies, you should get your ticket right away. I would also suggest this to fans of Rudd, since it’s a fun new direction for his career. This would also be a good one for fans of any of the other stars. I give this one 4.8 out of 5 stars.