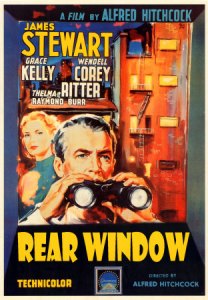 In 1954 Jimmy Stewart would star in a Western, a biographical film, and this suspense thriller. As he continued to prove his versatility, Stewart would find a new challenge working with the master of suspense. Although it took six years, this movie would also mark the second film to come from the partnership between Stewart and Alfred Hitchcock. The pair would eventually partner on a total of four films, including Rope, The Man Who Knew Too Much, and Vertigo. 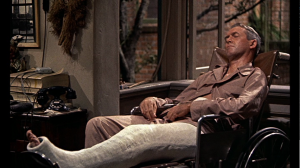 L.B. Jefferies (Stewart) is languishing in the sweltering Summer heat of his New York City apartment. To pass the time he’s been watching the lives of his neighbors from his rear window. His only respite has come in the form of his loving girlfriend and socialite, Lisa Carol Fremont (Kelly). When Jefferies becomes convinced that a woman has been murdered in the apartment opposite his, he’s tasked with convincing Lisa and his detective friend Tom (Corey). 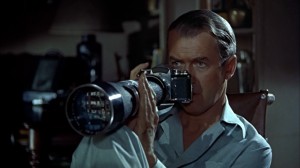 This movie would also be the only time that Jimmy Stewart would work with the gorgeous Oscar winner, Grace Kelly (High Noon). The movie also stars Wendell Corey (The Search) who had worked with Stewart on Carbine Williams. Six-time Oscar nominee Thelma Ritter (All About Eve) and Golden Globe nominee Raymond Burr (Thunder Pass) round out the core of the fantastic cast. 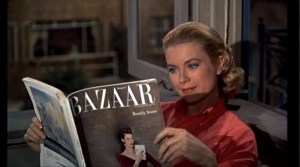 This film is based on “It Had to Be Murder”, a 1942 short story by Cornell Woolrich (Cloak & Dagger). The screenplay was developed and completed by Oscar nominee and frequent Hitchcock and Stewart collaborator, John Michael Hayes (Thunder Bay). He would earn an Oscar nomination for Best Adapted Screenplay. The writing quickly establishes the setting and allows the world outside of Jefferies window to come to life. The claustrophobic world that Jefferies lives in quickly permeates the whole tone of the film. The action and dialogue come together to bring out the kind of tension that earned Hitchcock the title of “the Master of Suspense”. 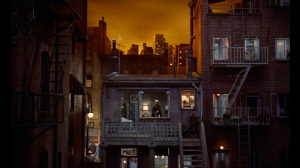 For Jimmy Stewart this was another example of his versatility. While he had worked in thrillers before, this took him to a new level. The mix of fear, anger, and helplessness come together with his performance. He also creates great chemistry with Kelly, helping their relationship feel established and honest. She’s equally great, playing a role that feels written for her. Not only does she carry herself with grace and style, she also plays her role with quiet strength. This strength becomes an essential part of the success of this movie. While these two lead the way, the rest of the cast do great work as well. The end result is one of the all-time great thrillers. 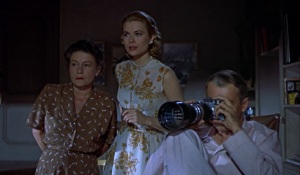 Alfred Hitchcock was a master of the little details, and they matter tremendously in this movie. He would earn an Oscar nomination for Best Director for his work on this one. Today this film is considered one of the best movies Alfred Hitchcock ever made. Costume designer Edith Head (The Sting) left her mark on this film with some wonderful work. Most notably, Grace Kelly’s costumes were wonderful and perfect for her role. Not only are the visuals incredibly done, but the sound work plays an important part in the movie. Franz Waxman (Rebecca) helped to compose the wonderful score, which also included popular music from the era. The movie would eventually be nominated for Oscars for Best Cinematography and Best Sound, Recording.

For Jimmy Stewart this was another opportunity to prove his power as a leading man. The film not only worked for the critics, but it also worked at the box office. The successes of the film would strengthen the partnership between actor and director, leading to The Man Who Knew Too Much. The following year, Stewart would again take a new direction, making the films The Man from Laramie and Strategic Air Command.